With his historical novel Leaving Gettysburg (Casemate Publishers, 2022), author Curtis Crockett has written a compelling account about individual Confederates and Yankees participating in a long-overlooked aspect of the Gettysburg campaign: the July 4-14 Southern retreat and Northern pursuit to the flooded Potomac River.

As Leaving Gettysburg opens, Pvt. Asa Helms of the 26th North Carolina Infantry Regiment reaches Seminary Ridge after surviving Pickett’s Charge. His eyes and ears conveying the battlefield’s chaotic din and motion, Asa searches amidst the butternut-clad human flotsam and jetsam for any survivor of Company B, which he joined in his native Union County, North Carolina. 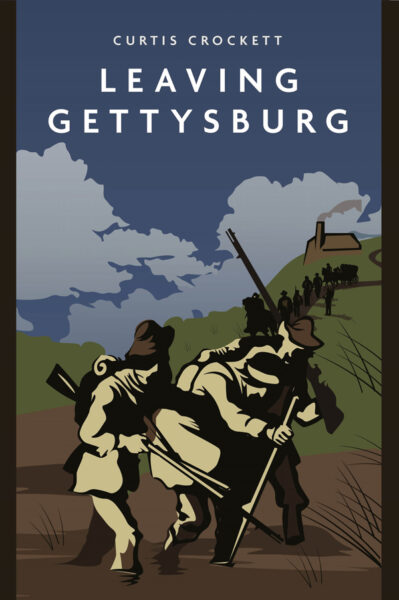 Helms finds his good friend, Pvt. Justin Chandler, also uninjured and just as stunned from the horror he witnessed. Together the two young soldiers will soon leave Gettysburg as Robert E. Lee withdraws his battered army toward the Potomac.

Joining the retreat are the wounded Brig. Gen. James J. Pettigrew (to whose brigade the 26th North Carolina belongs) and his loyal-to-the-South aide, Capt. Louis G. Young. Temporarily commanding the wounded Henry Heth’s division, Pettigrew leads his men up and across South Mountain.

The novel’s second main character (after Asa), Young experiences the withdrawal from an officer’s viewpoint. Pettigrew keeps him in the saddle, riding on various errands that bring Young into contact with Southern soldiers struggling to maintain their discipline and, sometimes, humanity.

The novel’s Union viewpoint begins with the July 3 cavalry fight’s aftermath, with Gray irritated that his officers bestow praise on Custer. Soon believing Custer favors another Michigan regiment, Gray finds himself limited in access to his new brigade commander; although he seldom physically appears in the novel, Custer lingers just off page wherever Gray rides.

Crockett weaves a tale of pouring rain, muddy roads, disintegrating shoes and men and horses, and battles at strange place names like Monterrey Pass and Williamsport. The novel particularly portrays very well Williamsport, devolving into a charnel house as weary, hungry Confederates and dead-on-their-hooves horses and mules converge in its streets.

Asa and Justin convey the Southern enlisted man’s nightmare of marching on execrable roads in incessant rain and deep darkness. The young infantrymen are sympathetic figures, Asa often thinking about his wife, Hester, and both soldiers wondering what their army accomplished at Gettysburg. The reader will likely hope (as I did) for the best for these men.

Dedicated to the Confederacy, Young is initially the least likable character (except for Company B’s top kick). He plays the martinet with a soldier commanding a burial detail. Suddenly realizing he has overplayed his hand, Young gradually softens his edges afterwards, but he remains the one character who could be shot, and nobody would miss him.

But history dictates the dying in Leaving Gettysburg. Humanity wraps around Pettigrew, placed too often (like other Civil War generals) on a pedestal. The reader will empathize with Pettigrew while he approaches Falling Waters; as with the 6th Michigan Cavalry’s Peter Weber, that particular fight (told by Asa Helms and George Gray) is a finality — but one more character also gets shot there.

Author Crockett hooked me on page 1 with Asa emerging safely from Pickett’s Charge. By focusing on a few particular characters and eschewing listening in on Lee or George G. Meade, Crockett brings the Gettysburg retreat to life as if the reader marches alongside Asa and Justin or rides with Gray.

I could not put down this book and wished for more of the story when it ended. Civil War authors like Eric Wittenberg are detailing the Gettysburg retreat’s historicity in non-fiction. Curtis Crockett brings the retreat to life in fiction, and I recommend Leaving Gettysburg is a must-read for everyone interested in the Gettysburg campaign.