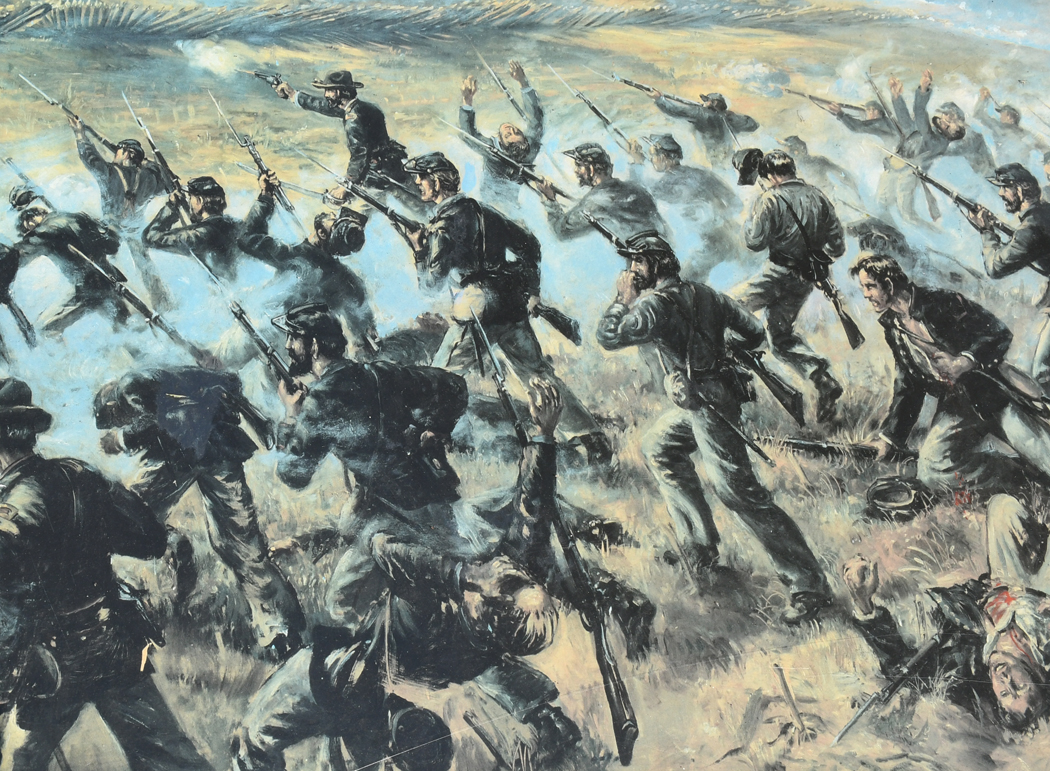 With one son killed and another son wounded while defending the United States, finances turned grim for Cherryfield farmer Nicholas Newenham and his wife, Bridget, during summer 1864. They asked the town’s selectmen to provide the family with financial assistance, as mandated by state law.

Born in Ireland (as was their oldest son, William), the Newenhams had arrived in Maine before their daughter Mary was born here circa 1834. The family appears in the 1840, 1850, and 1860 censuses for Cherryfield, also known in its early years as “Narraguagus,” the name for the river bisecting the town.

William was 32 and single when he joined Co. H, 18th Maine Infantry Regiment on July 23, 1862. His listed occupation as “lumberman” indicates a muscular physique. William stood 5-8 with blue eyes, dark hair, and a light complexion, and Governor Israel Washburn Jr. commissioned him a second lieutenant. He later made first lieutenant.

The War Department converted the 18th Maine into the 1st Maine Heavy Artillery Regiment. William charged with his men during that regiment’s disastrous June 18, 1864 charge at Petersburg; shot and wounded, yet recovered by comrades, he shipped to a New England hospital, only to die there of his wounds on July 19, 1864.

Born in Cherryfield, 21-year-old James H. Newenham was a lumberman and unmarried when he joined Co. G, 6th Maine Infantry Regiment on September 17, 1862. He stood 5-10 with blue eyes, brown hair, and a light complexion. 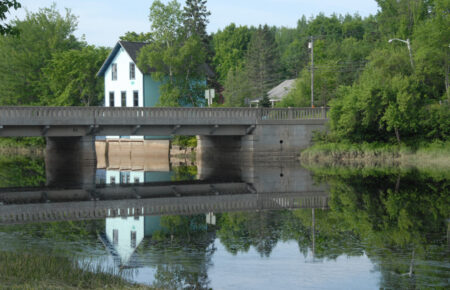 he calm surface of the Narraguagus River reflects the Route 1 bridge, a nearby house, and the forested river bank in Cherryfield, Maine on a perfect July morning. The town lies in western Washington County. (Brian F. Swartz Photo)

The 6th Maine participated in the Union charge up Marye’s Heights at Fredericksburg on Sunday, May 3, 1863, a bloody and successful charge overlooked amidst the Chancellorsville carnage. The bullet puncturing James did not end his military service. After recovering from his wound, he transferred to the 6th Maine Battery on July 14, 1864 and then the 1st Maine Veteran Infantry on September 20, 1864. He mustered out on June 17, 1865.

Back home in Cherryfield, the economic wolf knocked on the Newenhams’ door by early autumn 1864. Cherryfield selectmen Emulos Small, David Tucker, and James Wakefield had denied Nicholas’ repeated requests for help. To their credit (or not), they were not the only Down East selectmen to refuse ro pay the local funds as stipulated by the Maine Legislature in 1861. Cutler selectmen had previously denied such assistance to soldiers’ wives and a mother dependent on her only son, then in uniform.

Nicholas misspelled various words in his October 8 letter to John L. Hodsdon; I quote the original text to convey that sense of desperation permeating the letter.

Addressing Hodsdon as “Dear Sir,” Nicholas admitted “it is painful for me to rite to your honor, concerning the death of my son [w]ho died of his wounds in Rode Island.” Nicholas explained that William (not identified by name) was wounded at Petersburg on June 18.

He “was my only suport, as me and my wife is past our labour with old age and infirmities. Now your honor i hope that you will take it in consideration and rite to the [Cherryfield] Selectmen to give us our aid money,” Nicholas wrote. “I have aplied difirent times to them but the[y] refused giving it to me, on the grounds of my son being a oficer.

“While he was alive i did not Expect any aid money from them” because William had “sent me what was needful to maintain us, and i have another son in the service that was wounded at Fredericksburg, under General Hooker,” Nicholas wrote.

That son, James, “is a [financially] por soldier and has a wife and is not able to help me[,] so you see that i have done as much for the Government as any man in our town, if your Honor, will be so good as to rite to them [selectmen and] i will pray for your well fair in this world as long as you live.”

Identifying the three selectmen by name, Nicholas closed, “Your Obedient Servant” and signed his name.

The State Archives do not have any follow-up correspondence between Hodsdon and the Cherryfield selectmen. Ironically Nicholas and Bridget did receive a pension for William.

James Newenham and his wife, Elvira, had two children (Nellie, age 3 and George W., age 1) and lived in Cherryfield in 1870, when James was employed as a laborer with real estate valued at $600. He died on June 5, 1872. Nicholas Newenham died on January 1, 1873. By 1880 Brudget lived with her daughter, Charlotte, and her husband, William Hart, and their five children. Bridget died in 1892.