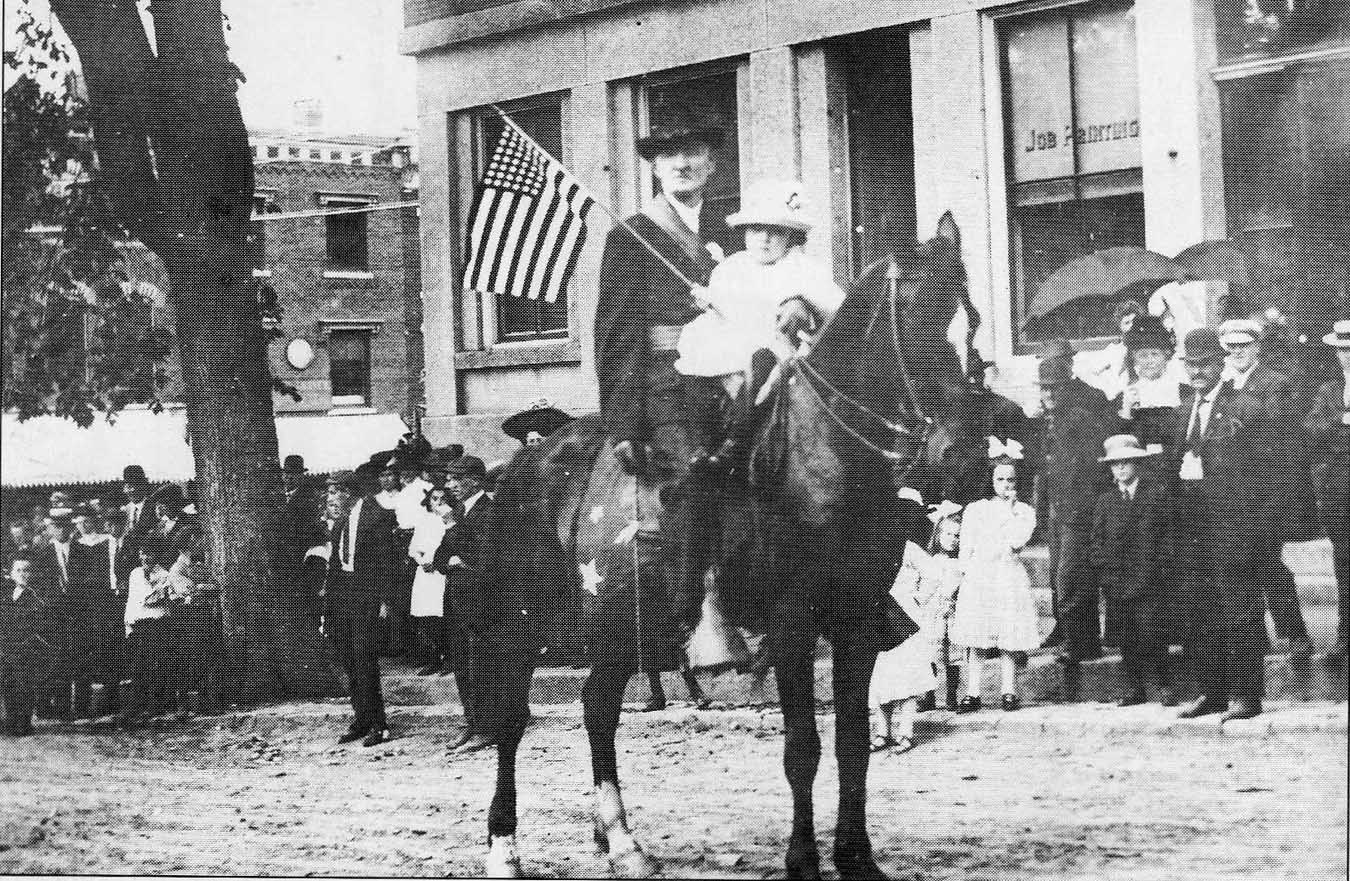 Confederates could not keep patriot James Harvey Stinson quiet, not even by almost obliterating his lower jaw. In fact, history suggests that Stinson — “Harvey” to his family and friends — became the life of the party during future veterans’ meetings in Maine’s Waldo County.

Born in Prospect to Graham and Jane (Mudgett) Stinson on May 7, 1848, Stinson lived in Belfast when he mustered as a private in Co. L, 1st Maine Heavy Artillery Regiment on December 28, 1863. An 18-year-old farmer, the unmarried Stinson stood a commanding 5-10½ (tall for that era) and had black eyes, black hair, and a dark complexion.

Originally recruited as the 18th Maine Infantry Regiment in summer 1862 and transitioned to a heavy artillery outfit several months later, the 1st MHA garrisoned District of Columbia forts until May 1864. After the Army of the Potomac suffered heavy casualties in the Wilderness, Ulysses S. Grant summoned several heavy artillery regiments from Washington as reinforcements.

The advancing Confederates ran into at least six heavy artillery regiments: the 1st Maine, the 1st Massachusetts, and the 2nd, 7th, and 8th New Yorks. The inexperienced “heavies” fought Ewell’s veterans, who withdrew later that day.

The 1st MHA suffered 481 casualties, including 82 men killed, five missing, and 394 wounded. Among the last was James Harvey Stinson, struck by a 0.56- to 0.58-caliber lead bullet. 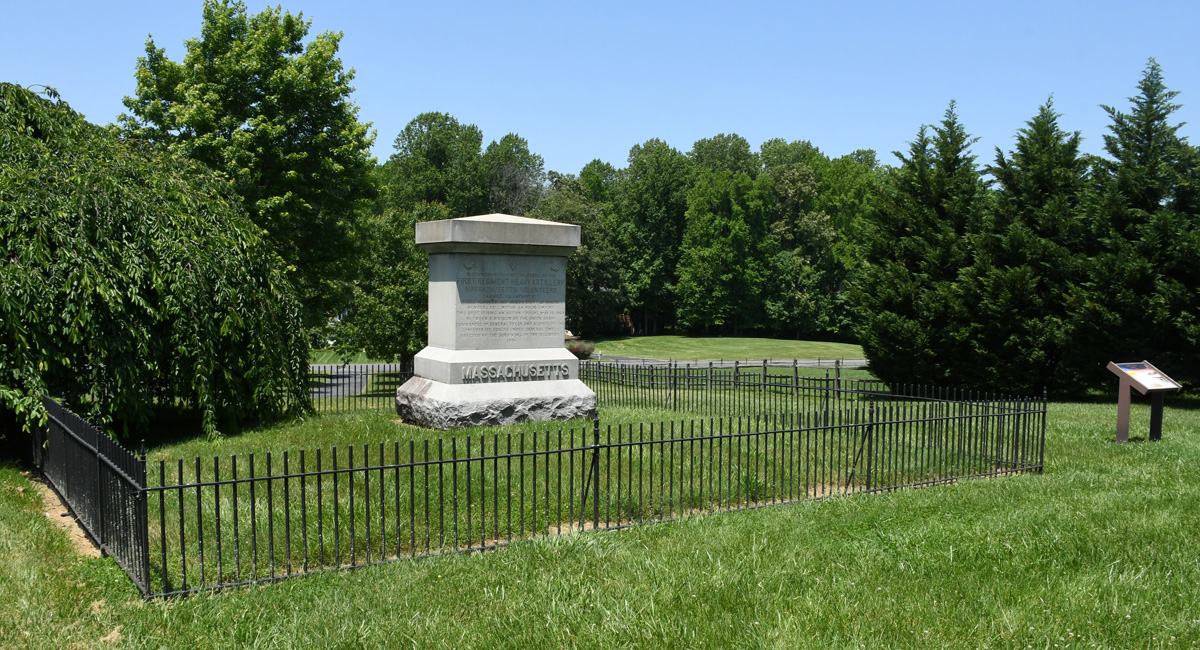 Located on a few acres surrounded by a swanky housing development, the site of the battle of Harris Farm incorporates the 1st Massachusetts Heavy Artillery Regiment’s monument and a few information panels. (Brian F. Swartz Photo)

On June 28, Monroe certified that Stinson was “badly wounded” in “the face and jaw. The ball entered near the left” side “of the nose[,] taking out three upper teeth,” Monroe stated in his confusing handwriting. The ball nearly severed Stinson’s tongue before exiting “through the angle of the lower [right] jaw, knocking out three molar teeth, and shattering it [the jaw] badly.”

By late June Monroe had extracted from Stinson “twenty two pieces of bone,” the largest piece 1¼ inches long and a quarter inch wide. “Other pieces are loose and will probably have to be taken out,” he noted.

Stinson “is feeble unable to travel. In my opinion he will not be able to report back to Washington” in less than 30 days from July 1, Monroe wrote. The army apparently decided Stinson need not rejoin his regiment; he ultimately went to the Cony Hospital in Augusta, and the War Department medically discharged him at that hospital on December 8, 1864. 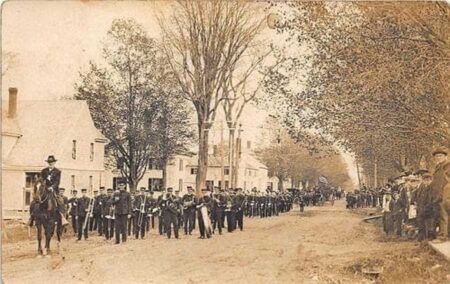 Grand Marshal James Harvey Stinson (left, mounted) leads a Memorial Day parade along a Belfast street. The parade may not yet have started; the bandsmen behind Stinson and standing while holding their instruments and looking at the photographer. (Courtesy Richard J.P. Smith)

The 1870 census found Stinson living with his parents and two younger sisters in Belfast’s Ward 5, which encompasses East Belfast to this day. He worked as a “mariner.” His mother had died by 1880, when the census found only James and his sister, Nellie, living with their 71-year-old father. James still worked as a “sailor.”

He had left the sea and returned to farming when he married Clara J. Welch of Belfast on January 18, 1896. Stinson was 47, his bride was 36, and Reverend George E. Tufts officiated at the wedding, the first for the bride and the groom. They settled in East Belfast, and daughter Maude Stinson was born in 1905.

For many years after the war, Stinson was active in local veterans’ affairs, joining Thomas H. Marshal Post No. 42, Grand Army of the Republic in Belfast and the Waldo County Veterans’ Association. “He was always the life of these [WCVA] meetings, often responding to urgent requests for a song and on the last occasion [in December 1915] singing Can the Kaiser,” the Bangor Daily News noted.

“On Memorial Day Mr. Stinson was always the Marshal of the day and rode his horse in the parades as gracefully as in his younger days,” the paper reported.

Stinson fell ill with a cold while working at Mason’s Mills in Belfast on Saturday, January 12, 1918. Clara and Maude cared for him at home, but his cold became pneumonia. “Every thing possible was done in an attempt to save his life,” reported the BDN, but Stinson died at 10 p.m., Wednesday, January 16.

His family held his funeral service at 1 p.m., Sunday, January 20 and later buried him in an unmarked grave in Grove Cemetery in Belfast. “That might have been the end of the story, but for his great-granddaughter, Joni Smith, who obtained his Military record from the Veterans’ Administration and applied for a headstone,” noted descendant Richard J.P. Smith.

The headstone was set in place and then “formally recognized by the Frank D. Hazeltine American Legion Post 43 and the Belfast Historical Society in the spring of 2013, 149 years after his wound and 94 years after his death,” Smith wrote.

Order your autographed copy by contacting me at visionsofmaine@tds.net.

Passing Through the Fire is also available at savasbeatie.com or amazon.com.