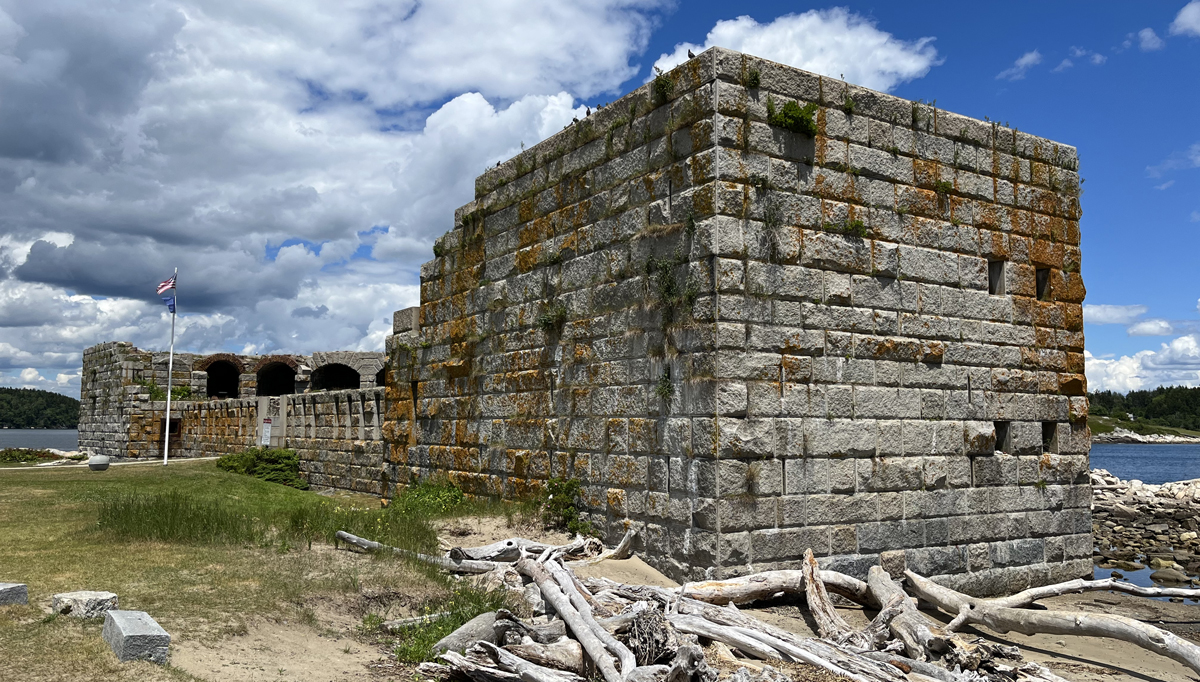 Construction started in 1861 on Fort Popham, a Third System fortification sited at Phippsburg at the Kennebec River’s entrance in Maine. Now a state historic site, the fort was never completed, but was garrisoned during the Civil War and lightly manned during the Spanish-American War and World War I. (Brian F. Swartz)

Bad wartime news could not stop a shindig held in Phippsburg on Friday, August 29, 1862.

This post is based on an article previously published in Discover Maine Magazine.

Second Manassas raged in northern Virginia as people converged on “the mouth of the Kennebec river, on the spot anciently called the peninsula of Sabino” to observe “the 255th anniversary of the planting, by Sir George Popham and his associates, of the first European Colony in New England,” announced the Maine Farmer on Thursday, September 4.

Editor (and publisher) Ezekiel Holmes referred to the Popham-led expedition that established a colony at the Kennebec River’s mouth in mid-August 1607. Abandoned in 1608, the site dovetailed nicely with 1862.

“Now known as Hunnewell’s Point,” the Sabino Peninsula was “the site of the Fort now in [the] process of construction by the United States Government. This Fort has been appropriately named in honor” of Sir George Popham, Holmes wrote.

The August 29 observance offered everything that people still love about a Maine summer. The “historical event” was important, “to say nothing of the magnificent weather … and the anticipated ‘chowder’” that would be doled out helped attract “a large gathering of people,” Holmes noted.

Local railroads and steamboat lines offered “low fares” to attract travelers. People packed “the trains from Augusta and Portland, and the steamboats and barges upon the river were taxed to their utmost capacity in the conveyance of passengers,” Holmes wrote.

All the hoopla actually focused on dedicating “a memorial stone in honor of Sir George Popham.” and the formal ceremonies took place on the Fort Popham parade ground. 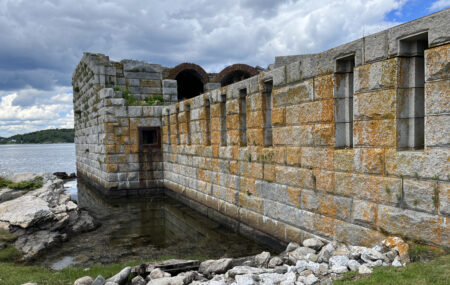 The Kennebec River tides have relentlessly lapped at Fort Popham since its construction began in 1861. (BFS)

Former congressman Charles J. Gilman of Brunswick served as the ceremonial marshal; the Right Rev. George Burgess, D.D. — the bishop of the Diocese of Maine — handled the religious services. The president of the Maine Historical Society, William Willis, then spoke briefly about the historical significance of Sir George Popham.

Other speakers were Brunswick College President Leonard Woods Jr., Republican gubernatorial candidate Abner Coburn, and Capt. Thomas L. Casey (an Army engineer involved with the fort’s construction), J.H. Drummond (grand master of the Grand Lodge of Maine), and orator John A. Poor, whose lengthy speech “was a production of much ability and eloquence, evincing a varied and discriminating acquaintance with the early incidents of American settlement and colonization,” Holmes wrote. 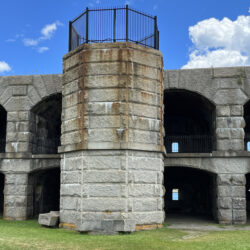 Two towers access the two tiers of casemates completed at Fort Popham before construction stopped after the Civil War. (BFS)

Within minutes of Poor finishing his stem-winder, “a large portion” of the crowd “marched in procession to the mammoth tent, pitched at a convenient distance inland, where an excellent chowder had been provided for their entertainment,” Holmes said.

The main dish was likely a fish chowder; Holmes did not specify the main ingredient. He noticed that “toasts, speeches and music” accompanied the meal; people patiently waited in long lines while volunteers ladled out the chowder and diners found places to sit.

Holmes reported that “the occasion passed off without accident or disturbance, and was, on the whole, a successful celebration.” But not all went well, as he admitted. 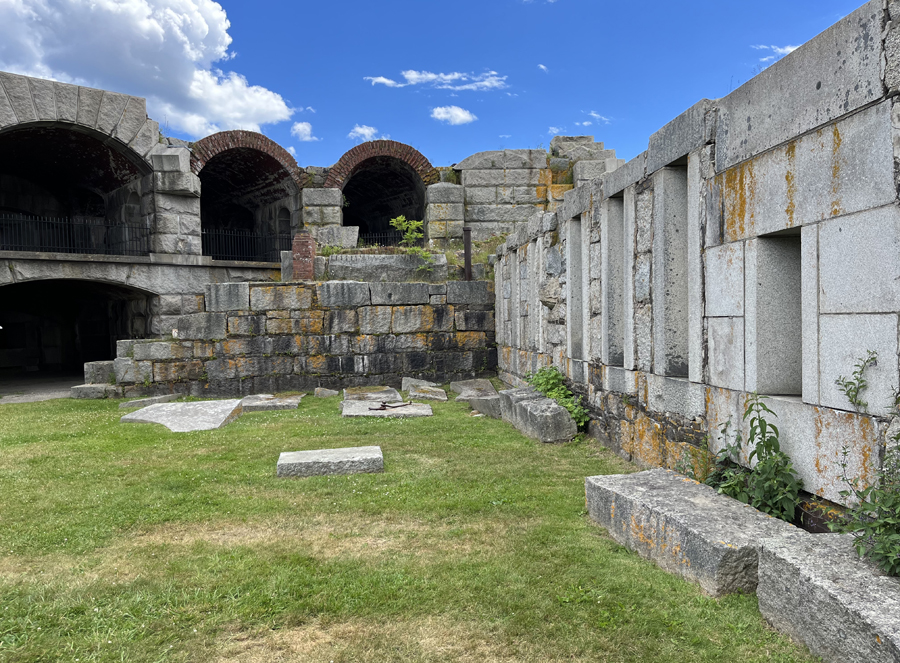 The boats and barges transporting people on the Kennebec River were packed to the gills, and some issues involving “close stowage, detention and swindling” took place aboard ship. Then there was “the unnecessary dulness [sic] and prolixity of the ceremonies of commemoration,” a polite way of saying that the speeches had been neither interesting nor short.

There was a “lack of adequate accommodations at the Fort for the tired and hungry crowd in attendance,” Holmes wrote. Modern visitors to Fort Popham State Historic Site can appreciate the 1862 situation; there was not much space for a lot of people then, and there is not much space for parking cars beside the fort now.

But what Holmes did not reveal was that event organizers had planned for far fewer than the 5,000 to 7,000 people who turned out. Civilians had flocked to isolated Fort Popham to enjoy a wartime diversion, and “the occasion was one of much interest and enjoyment,” Holmes wrote.

But do not doubt for one minute that a free chowder served on a late summer’s day did not entice many, many people to Phippsburg that day …