Erie, Pennsylvania historian Hans G. Myers brings to life an overlooked Gettysburg hero with his new book, The Lion of Round Top: The Life and Military Service of Brigadier General Strong Vincent in the American Civil War, but readers must look past another officer altogether to learn about the warrior who led the 3rd Brigade at Little Round Top. 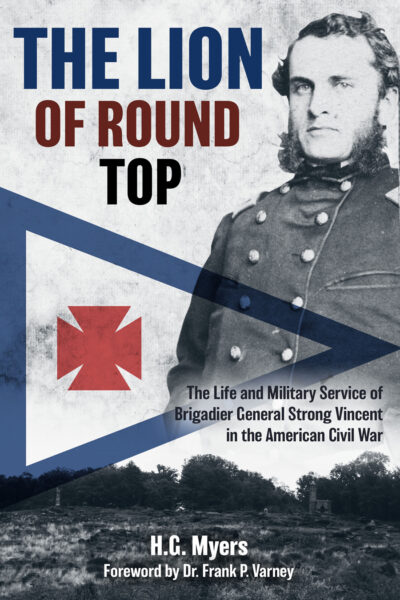 The introduction, titled The Vanishing of Vincent, quickly establishes a sub-theme irrelevant to this interesting biography about a key Gettysburg and Civil War figure: Myers attempts to elevate Vincent by knocking Joshua L. Chamberlain. Trying to explain why Vincent’s “name … has been nearly so lost to history,” the author claims that concerning his subject, “his reputation and his legacy have been diminished, especially over the past century, to benefit his subordinate, then—Colonel Joshua Lawrence Chamberlain,” as if the long-dead Mainer orchestrated his pop-culture popularity from beyond the grave.

The Chamberlain criticism lingers as Myers finally explains his book’s raison d’etre: His research-based opinion that “without question … Brigadier General Strong Vincent has been critically discounted and undersold by generations of historians.” With this opinion I concur, and once Myers hits his biographical stride in chapter 1, the Vincent tale unfolds in rich detail.

Born in Waterford in northwestern Pennsylvania on June 17, 1837, Strong Vincent moved to Erie with his family in 1843. His father, Bethuel, co-owned a foundry there, and that summer Strong Vincent started school at Erie Academy.

An Erie native, Myers reveals his local knowledge by identifying the people, streets, and sites affiliated with the Vincents. When Strong Vincent declared his schooling completed at age 14, Bethuel sent him to the foundry. After working six months as a laborer, Vincent transferred to the counting room as a clerk; he rose to chief clerk when he was 17.

When Vincent realized he needed additional education, his father sent him to Trinity College in Hartford, Connecticut. He met Elizabeth Carter, a teacher at Miss Porter’s School in nearby Farmington. Their courtship shifted to long distance when Vincent entered Harvard in autumn 1856.

After graduating in 1859, he returned to Erie, joined a militia company, studied law, and gained admittance to the bar. Fort Sumter’s surrender led Vincent to join the locally recruited Erie Regiment as the second lieutenant in Co. A. Just before the regiment shipped to Pittsburgh, Vincent traveled to New Jersey and married Elizabeth Carter on April 27.

He soon became Co. A’s first lieutenant and the regiment’s adjutant, but the 90-day Erie Regiment later returned to Erie to muster out without ever leaving Pennsylvania. The regiment’s colonel, John McLane, started recruiting another regiment in late July; this unit became the 83rd Pennsylvania Infantry. Strong Vincent immediately re-enlisted, made major in early September, and went to Washington, D.C. to arrange a bivouac site and find equipment prior to the 83rd’s arrival.

Detailing the regiment’s assimilation into the army, Myers introduces Daniel Butterfield and Fitz John Porter (brigade and division commanders respectively) and explains how the 83rd Pennsylvania and the 44th New York developed a close friendship. Historians often overlook how this affiliation affected each regiment’s placement on Little Round Top; Myers does not, to the reader’s benefit.

He accompanies Vincent and the 83rd onto the Peninsula and shares anecdotes about Strong Vincent (long since promoted to lieutenant colonel) and his adventures. Of particular interest was Myers’ report about “a reconnaissance up the Pamunkey River toward Richmond” and a nighttime encounter between the Pennsylvanians and a plantation’s sleepy slaves.

The 83rd Pennsylvania lost 35 percent of its strength while fighting at Gaines Mill. Hearing about the battle, the feverish Vincent left the hospital to resume command. He did for a while before the sickness dropped him from his horse and forced his medical evacuation to New York City, where Elizabeth met him. Myers shares a poignant letter that Elizabeth wrote about traveling to NYC and helping care for her husband, named the 83rd’s colonel on July 4. Sent home to recover, Vincent rejoined his regiment near Sharpsburg in October.

Myers weaves into his book historical personages and events as they relate to Vincent and reveals the Erie warrior’s bravery at Fredericksburg, where Vincent stood so his men could see him as Confederate shells exploded around them. He presided at courts martial in late winter, and in March the army offered him a position as judge advocate.

Saying “yes” would have taken Vincent out of harm’s way. Instead he responded, “I enlisted to fight,” and stayed with the 83rd Pennsylvania, a decision that ultimately led him to Little Round Top and glory. 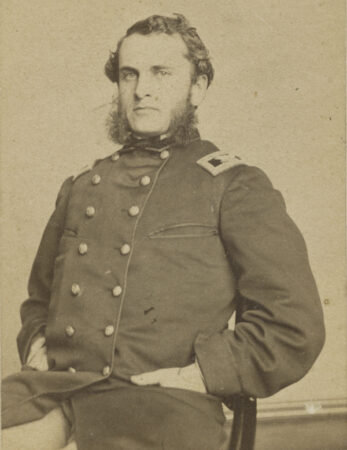 Colonel Strong Vincent posed for this photo while visiting his wife and family in Erie, Pennsylvania in February 1863. (Library of Congress)

Given 3rd Brigade command in mid-May, Vincent led his four regiments north to Gettysburg. Pausing at Middleburg to skillfully handle his brigade against Jeb Stuart’s dismounted cavalry, he would “take the responsibility of taking my brigade” to Little Round Top in late afternoon on July 2.

Myers chronologically and clearly details the resulting fight, from when James Longstreet launched his flanking attack to the savage LRT combat to Vincent “and his officers” driving the retreating 16th Michigan back “to the front.” The action’s fast and furious; although they know what happens next, readers may mutter, “Aw, nuts!” when a bullet punches into Vincent’s groin. By now the Erie soldier is so familiar and well-liked a character that one could well wish the bullet never hit him.

The wound would kill him on July 7. Myers covers Vincent’s funeral and subsequent honors (especially his monumental immortality at LRT) in the last chapter. The Chamberlain criticism resumes; Myers ties it to specific veterans in the early 20th century before reiterating that “Strong Vincent saved the Union that day” at Gettysburg. “He—and he alone—deserves the lion’s share of the credit for the defense of Little Round Top.”

Rather than closing his book on such an irrefutable high note about Strong Vincent, Myers swipes at Chamberlain in two of the three closing paragraphs. Then follows the appendix titled The Origins of the “Chamberlain Myth,” in which Myers yet again criticizes Chamberlain.

The Lion of Round Top is a good, well-researched biography certainly worth the read. However, after encountering so much bad press about Chamberlain at the beginning and the end, a confused reader might recheck the front cover while asking, “Just who is this book about anyways?”

Disclaimer: Maine at War blogger Brian Swartz is the author of Passing Through the Fire: Joshua Lawrence Chamberlain in the Civil War