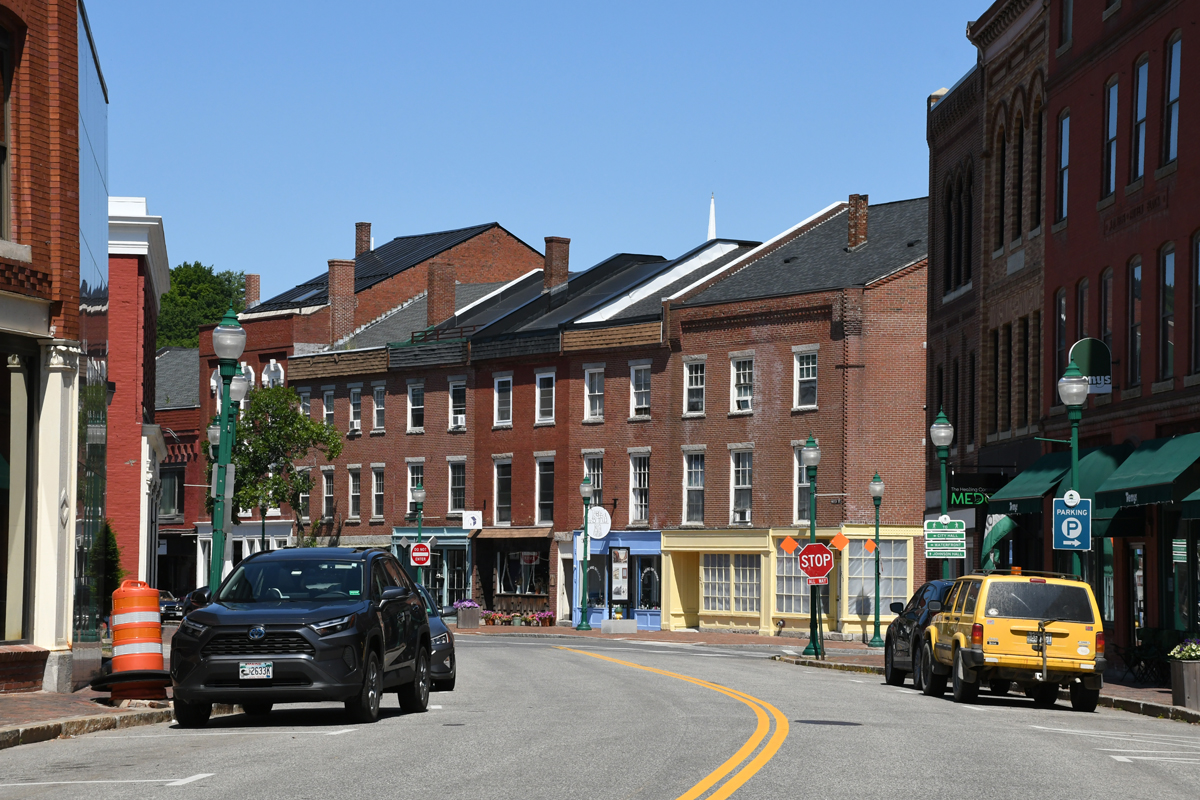 Architecturally historic buildings line Water Street in Gardiner, a Kennebec River town that supplied more than half the 100 recruits (plus the captain) for Co. I, 24th Maine Infantry Regiment in latter 1862. (Brian F. Swartz Photo)

Veterans who had endured Port Hudson’s hell patiently listened as two politicians — one a minister just as long-winded as any elected Maine official — welcomed the weary warriors home. Then they finally got to eat.

And a local newspaper reporter criticized their perceived (and collective) lack of appetite. 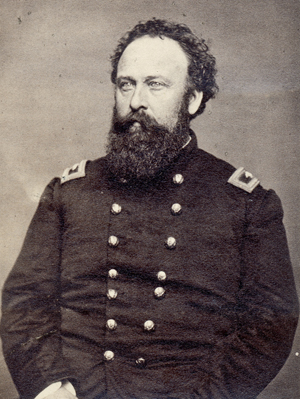 Commanded by Col. George Marston Atwood, the 24th Maine Infantry had mustered into federal service at Augusta on October 16, 1862. The regiment was one among eight “nine-month” regiments that Maine raised at late summer and early autumn. The colonelcy went to the 45-year-old Marston, a 5-7½ Gardiner book seller with blue eyes, brown hair, and a light complexion.

Hailing from Boston, Dr. Silvanus Gardiner established Gardinerstown Plantation in 1754 where the Cobbosseecontee Stream flows into the Kennebec River. The stream powered grist- and sawmills, and the river brought ships loading with lumber for Boston and ports beyond. The town’s population rose from 1,029 people in 1810 to 6,486 people in 1850; later that same year West Gardiner residents split from Gardiner and formed their own town.

The 1860 census found 4,487 people living in Gardiner. Many men enlisted early in the Civil War, but enough men remained to round out Co. I, 24th Maine Infantry, which Capt. George W. Smith (a 5-11, blue-eyed and brown-haired Gardiner “currier”) recruited mostly in Gardiner, Chelsea, Hallowell, Pittston, and West Gardiner. He even picked up Charles S. Hildreth, a New Yorker. 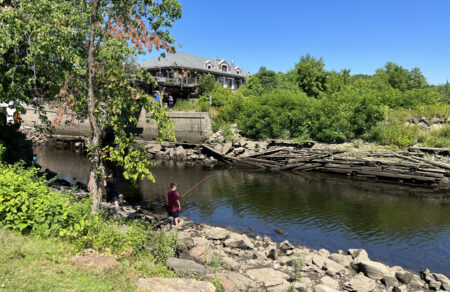 Anglers line the banks of Cobboseecontee Stream where it reaches the Kennebec River in Gardiner. Waterfalls along the stream played a major role in the city’s economic development. (BFS)

Finally declared measles-free, the 24th Maine lads boarded the steamer Lizzie Southard on January 12 and sailed for Louisiana. Weather-detained at Fort Monroe until January 26, the Mainers reached New Orleans on February 14 and went upriver to Bonnet Carre, “forty mile above New Orleans,” wrote Atwood, who referred to the new post as “Bonne Carre.”

“During its stay at thus place a portion of the regiment was engaged in active duties at different times and places,” he said. On March 9 George Smith and Co. I left to guard the New Orleans & Jackson Railroad.

Before rejoining the regiment on April 12, Smith and his men had “occupied Wadesboro [two miles from Ponchatoula] and captured a large quantity of hides and tobacco, took fifteen prisoners, held the place two days, and then evacuated” the settlement, Atwood reported.

Then on “May 21st the regiment was ordered to Port Hudson, where it remained through the whole siege of that place,” he noted.1 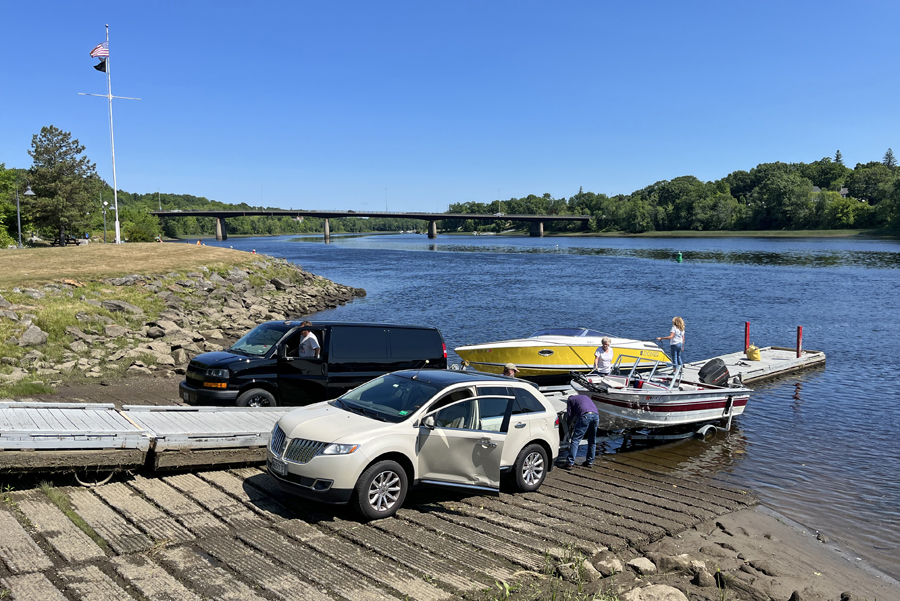 Where steamboats and schooners once plied the Gardiner wharves, boaters now launch their watercraft into the Kennebec River at the double ramp located at Gardiner Landing. (BFS)

Confederate troops garrisoned the high bluffs at Port Hudson, a steamboat landing located where the Mississippi turned “sharply to the Southwest” while en route “to the sea,” observed Adjutant Joseph T. Woodward, 21st Maine Infantry Regiment. He described Port Hudson as “a small hamlet” amid rough terrain, bounded on the north by Thompson’s Creek (also called Thompson’s Bayou), along the river by high bluffs now bristling with cannons, and on the east and south by high ground “broken by ravines with precipitous banks heavy wooded, with occasional clearings.”2

Union troops commanded by Maj. Gen. Nathaniel Banks ringed Port Hudson while Navy warships bombarded the town from the river. The 24th Maine participated in the disastrous May 27 assault that cost Banks 1,995 casualties, including 293 killed, 1,545 wounded, and 157 missing.

At least eight 24th Mainers were wounded at Port Hudson, but none died in action. “The regiment lost heavily from disease, not less than 184 having died. About 100 were discharged for disability,” Atwood reported.

After Port Hudson fell, the 24th Maine shipped by steamboat up the Mississippi River to Cairo, Illinois and then by train from there to Chicago, Buffalo, and points east. Atwood and his worn-out soldiers reached Augusta on August 6 and went home until the regiment mustered out of federal service on August 25.

“Our boys look as though they had seen hard times, for they are reduced almost to skeletons,” a local reporter described the Gardiner veterans’ collective appearance. “Many of them have the fever and ague on them.”

On August 18 Gardiner residents threw a gala reception honoring their hometown heroes, and a local reporter criticized the veterans for one particular fault — at least a fault in his eyes, not theirs.3

Next week: 24th Maine veterans receive their due honor in Gardiner