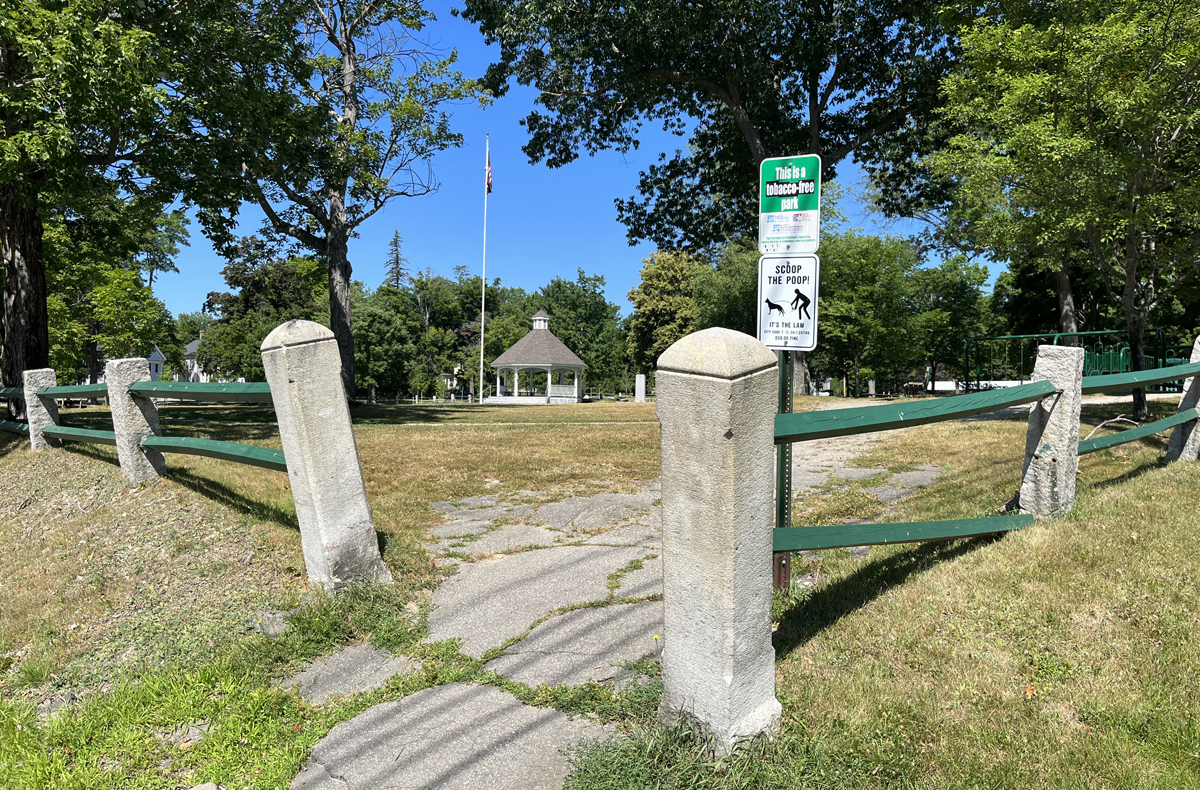 Forty-one hometown veterans from Co. I, 24th Maine Infantry marched through the Gardiner, Maine streets on Tuesday evening, August 18, 1863 to be honored in a celebration at the Gardiner Town Common. The soldiers approached the Common from Dresden Avenue, onto which this entrance opens. (Brian F. Swartz Photo)

As Gardiner residents staged a proper “When Johnny Comes Marching Home” celebration for their city’s Port Hudson veterans, a local reporter nitpicked about a particular matter. He was fortunate that the weary soldiers did not hoist him on their bayonets.

“Escorted by [the] Fire King Engine Co., and the Gardiner band,” the soldiers marched southeast on Water Street (modern Route 24), turned right at Kingsbury Street, and proceeded southwest uphill to Dresden Avenue. There the procession turned right (northwest) and marched to the Gardiner Town Common. The route avoided the steep hill on Brunswick Avenue (modern Route 201).

While many early Maine towns had a “common,” Gardiner’s is among the few to remain relatively intact into the 21st century. A bandstand, the local Civil War monument and other monuments, and a playground occupy the common today.

The veterans entered “the Common” where “an arch had been raised, surmounted by the words ‘Welcome Home,’” wrote the Gardiner Home Journal reporter. “As they passed under it, a band of some fifty young misses met them, and presented each soldier with a splendid bouquet of flowers.” 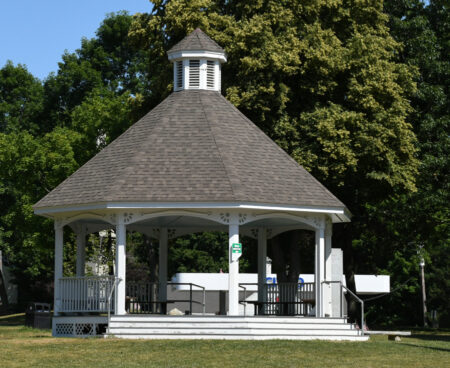 The modern bandstand at Gardiner Town Common provides some idea of how the town’s bandstand appeared in 1863. (BFS)

The procession halted “in front of the [band] stand,” and the soldiers listened respectively as Mayor James Nash bade them “a cordial and hearty welcome home” (italicized in the original) on “behalf of the citizens of Gardiner.”

Praising the soldiers’ accomplishments in defending the United States, Nash stressed that “you have borne your part—fought bravely and done your full share in securing” the Mississippi for the Union. He cited Port Hudson and Vicksburg and talked a while longer before asking that “the same kind Providence, that has guarded you through the many scenes of peril and strife, still continue to guide and bless you in your retirement.”

Reverend George Burgess, Maine’s Episcopal bishop, spoke next. Talking longer than did Nash, he said, “We are now here, in this cool August evening, to welcome you back, safe and successful. The fresh breezes of your own State are already breathing renewed vigor into your frames, often exhausted and needing repose.”

He had done his homework. Granted that only Gardiner soldiers “stand again in safety on the green grass of Gardiner common,” Burgess knew the men were played out.1

Company I lost no men to combat, but a corporal and seven privates died of disease. Last to go before the August 18 celebration were 21-year-old Pvt. Winfield S. Dearborn (a 6-3½, hazel-eyed and brown-haired Hallowell laborer), dead at Bonnet Carre in Louisiana on June 14; 36-year-old Pvt. Cephas Morang (a 5-9½, blue-eyed and black-haired Chelsea farmer), who “died of fever” at Baton Rouge on July 17; and 34-year-old Corp. Robert S. Starbird (a 5-9, blue-eyed and brown-haired Gardiner “millman”), “died of fever” at Chicago on August 4.2

His comrades apparently paid to embalm and ship home Starbird, who had fathered at least four children with his wife, Abigail. His family buried him at the Carr Cemetery in Bowdoin, where he was born in 1828.3

Burgess wondered if the dead Co. I lads “would have chosen rather to have died in the conflict, or by honorable wounds, than by the slow or rapid blight of the diseases under which they sank into the grave.” 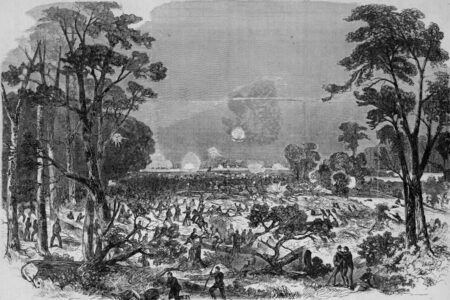 He gazed into the future. “If you should live till grandchildren shall grow up at your side and at your knees,” and if they asked about “the events of the great war … it will be a joy sufficient to repay you for all your toils and dangers, that you can then say: ‘I was at Port Hudson.”

Burgess dismissed the hungry veterans. “Soldiers, you have done your duty, and once more, we welcome you home,” he said.

The Co. I lads, Port Hudson veterans all, trooped “to tables loaded with provisions, provided by the fair hands of the Gardiner ladies,” noted the reporter, adding that the soldiers were “expected to lay in ‘eight days rations.’”

Eating all they could, the veterans were “unable to clear the tables,” he commented. “Indeed, we think unaided they would have required nearly as much time for the task as it took them to reduce Port Hudson.”

There are times when a reporter should stop writing, but this particular journalist put his foot in his mouth. Had he spoken aloud that Port Hudson comparison on that Tuesday evening, the Co. I lads might have taken offense, might have found some bayonets on which to hoist the reporter.

He had not shared Port Hudson’s hell with the veterans, and he should have shut up.

The soldiers “did the best they could,” and civilians attending the celebration were invited to dine. “No resistance was made to the draft—and the victuals was mostly soon disposed of.”

Later that night some veterans — “such … as chose” — attended the ball given in Co. I’s honor at Temperance Hall.” Dance partners evidently abounded; “the Gardiner ladies by no means look unkindly on the returned soldier who has done his duty,” the reporter observed.4