Larry Burden lives in historic and scenic St. Andrews, New Brunswick, located across Passamaquoddy Bay from Robbinston. He’s a retired Royal Canadian Mounted Police sergeant with a passionate interest in history and the Civil War — and he portrays an enlisted soldier in Co. I, 20th Maine Infantry Regiment.

Company I’s members are all Canadians because the outfit is the oldest organized Civil War re-enacting group in the Maritimes and east of Montreal (a second re-enacting group formed in New Brunswick three years ago). The original Co. I was recruited in summer 1862 along Maine’s Midcoast (Thomas Chamberlain of Brewer was an outlier), but modern 20th Maine companies are scattered across North America.

The Canadian 20th Mainers portray soldiers overlooked in the history books either side of the international border. Most Mainers are unaware that many Canadians (primarily from the Maritimes, Newfoundland, and Quebec Province) joined Pine Tree State regiments and artillery batteries during the Civil War. Some Canadians already lived in Maine; others traveled here to enlist.

The evidence lies in period records and personal correspondence. According to the 1863 Maine Adjutant General’s Report, 30-year-old Patrick Hayes of New Brunswick joined the 6th Maine Infantry in August ’62 and was wounded at Second Fredericksburg on May 3, 1863. John McNally of Saint John and Thomas Macky of Halifax were original 6th Maine recruits. So was John A. Glass of St. Stephen; wounded at Fredericksburg on May 3, 1863, he died that June. 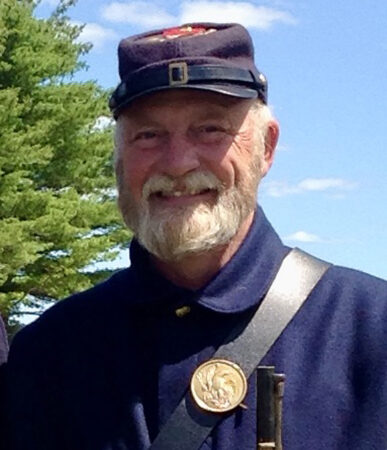 Burden came to his Co. I membership via a childhood interest. “I have always been a big military history buff,” he said. His father was stationed in Europe while serving in the Royal Canadian Air Force. “In the early 1960s my playground was old German pillboxes and other fortifications along the Rhine River,” Burden recalled.

“For holidays my father took us to military memorials and battlefields, like Vimy Ridge,” he said. “I even remember going to Nazi concentration camps like Dachau and being held up by my father to see inside the crematorium oven. When I tried to crawl in, he pulled me back and told me what it had been used for.

“I remember to this day walking on the black greasy dirt in Dachau, and made a very big impression on me,” Burden said.

As for becoming interested in the Civil War, “we were inundated with American TV and movies” while growing up in southern Ontario, he recalled. “We knew more about American history than our own history, and nothing has changed in fifty years.

“I have always had an interest in the Civil War, but I wasn’t until I retired that I met members of Company I, 20th Maine, when they were marching in the local St. Patrick’s Day parade, pretending to be the Union Irish Brigade,” Burden said.

Wondering why American re-enactors “would travel to St. Andrews to march in our little parade that had as many dogs in it as people,” he learned the re-enactors were Canadians representing “the thousands of Atlantic Canadians who fought in the Civil War.”

Burden attended Co. I’ next meeting, held a week later at Fort Howe in Saint John. He soon purchased a uniform and, “eager to learn more,” participated in the School of the Soldier staged by Co. B, 20th Maine at Fort Knox State Park in Prospect, Maine. He bought “the rest of my equipment and a tent and have been returning and supporting Co. B as well, ever since.” He also belongs to Co. B.

Few Americans and Canadians are aware of the roles that many Maritimers some Newfies played in the Civil War. Canada did not yet exist as a nation, and New Brunswick, Nova Scotia, Prince Edward Island, and Newfoundland were individual British colonies.

The Co. I re-enactors have found that “trying to promote the history of the American Civil War anywhere in Canada is a difficult task,” Burden said. “We spend most of our time at static displays in community fairs and at places like the Halifax Citadel.

“When people interact with us, they are very surprised to learn about an aspect of our history that was never and still is not taught in school,” he said. 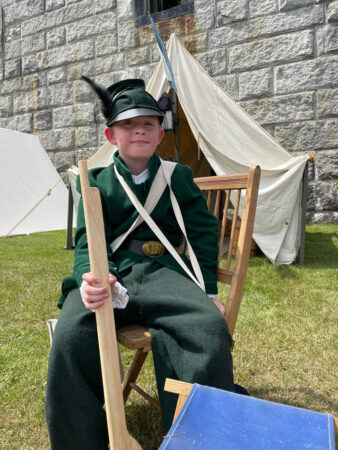 Brennan, Larry Burden’s grandson, portrayed a Union sharpshooter while participating in the July 2022 Civil War weekend held at Fort Knox State Park in Prospect. He is learning a lot about the Canadians who joined the Union army and navy during the war. (Courtesy Larry Burden)

His grandson, Brennan, is learning that history as he joins Burden and Co. I each summer. While a Mountie, Burden was frequently transferred and “spent most of my career in British Columbia. When I was promoted to sergeant, I was transferred to our national headquarters” in Ottawa.

“By then our children had either left the nest or gone away to university. My daughter stayed in British Columbia. By the time my grandson was born, we had been transferred to New Brunswick, where I eventually retired” in 2014, he said.

“Metro Vancouver is a long way from New Brunswick, and frankly I couldn’t afford to move back there,” Burden said. “So we have brought our grandson home every summer since he was born.”

Portraying a Union sharpshooter right down to the forest-green uniform, Brennan joined his grandfather at the Civil War Days’ Living History Weekend held at Fort Knox this past July. Brennan lived a soldier’s life for the weekend.

“It was only natural that I would take him Civil War camping with me, and we have been doing that since he was three,” Burden said. “Living in an apartment in a major city doesn’t compare to spending your summers on acreage in rural New Brunswick.

“Now he can’t wait to show people around the camp and tell them that he is a Civil War soldier. He loves it, and the public loves him,” Burden said. He and Brennan marched with Co. B, 20th Maine in the July 4, 2022 parade through Brewer and Bangor.

This new book chronicles the swift transition of Joshua L. Chamberlain from college professor and family man to regimental and brigade commander.