An Amish farm spreads along the western side of the Golden Ridge Road in Sherman, a small town in southwestern Aroostook County. Settled by hard-working men and women seeking relatively inexpensive land, Sherman turned out en masse to support the Union during the Civil War. (BFS)

To the aptly named Sherman, Maine goes “the undisputed honor of being the Banner Town in the United States” by summer 1865, according to late 19th-century historian May H. Spooner. And how had this small town located amidst the rolling hills in southwestern Aroostook County earned this distinction?

By sending “113 soldiers” to help preserve the Union. This number seems preposterously low (and Spooner missed a man) when compared to recruitment figures in much larger Bangor or Portland, but no other Northern municipality turned out a higher percentage of its men to defend the United States.

The first settler, Albert Cushman, came northeast in 1832 from Sumner in Oxford County to claim the 200 acres he had purchased in Township 3, Range 5 (Sherman’s earliest incarnation). Downstate lumber barons coveted the seemingly infinite board feet locked up in the trees rolling to the horizons. By luring settlers like Cushman, large landowners created readily available labor; men working their farms in summer and fall often hired out as loggers in the brutally long winters. 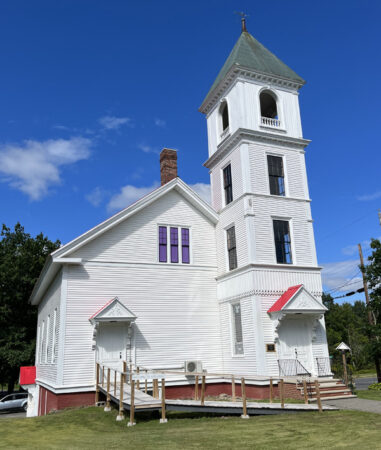 Attracted by relatively cheap land, more settlers came to “T3R5,” as the modern Maine Atlas and Gazetteer would identify Sherman if it had become neither plantation nor town. Sherman borders on its east Township 4, Range 5, which the Gazetteer designates “T3R4.” The quaint nomenclature dates to Maine’s colonial era and early statehood.

More settlers moved into the area, and Township 3, Range 5 became Golden Ridge Plantation and then in January 1862 incorporated as Sherman in honor of John Sherman, younger brother to William Tecumseh Sherman. Only 486 people, including 130 registered voters (all men), lived there in 1861.

“The people were almost without exception were dependent upon daily labor, and their farm products, for their means of livings,” Spooner wrote. “Many had hardly more than arrived in town, cleared a few acres of land and built rude dwellings in which to live, until with nothing but strong hands and sturdy wills they should convert the proud forests into more comfortable and attractive homes.”

Travel to and from geographically isolated Sherman was difficult in spring (often called “mud season”), summer, and fall and was almost impossible when blizzards howled across the Aroostook plateau in winter. Even with today’s plowed roads, Sherman can seem far away, especially for tourists venturing north to Aroostook for the first time.

From Kittery on the Piscataqua River, Interstate 95 runs north by east 305 miles (and a bit) to the Canadian border at Houlton, the Aroostook County shiretown. The speed limit increases to 75 miles per hour north of Exit 193 (Orono/Old Town), but frequent fliers go faster.

North of Exit 193, trees dominate the scenery; trees, trees, and more trees, and only four exits exist until I-95 crosses the Penobscot River and reaches Exit 244 at Medway. Twenty miles north at Exit 264 lies Sherman, settled by tough men and tough women who responded when their nation needed help.

All traffic leaving I-95 at Exit 264 turns either west or east onto Route 158 (Main Street). To the west, just past the Irving Oil convenience store at 18 Main Street, Route 158 intersects Route 11, the aptly named “Grindstone Road” running east from Siberia in Stacyville, the town bordering Sherman on the west. The name “Siberia” strongly hints at the region’s wintry cold and snow.

At the Exit 264 stop signs, motorists turning east follow Route 158 (Main Street) to Sherman Mills, the town’s built-up section. Just over the Molunkus Stream bridge, Route 158 becomes Woodbridge Corner Road and climbs uphill to intersect Route 2. At the same intersection where Route 158 gets a new name, the Golden Ridge Road angles to the left (northeast) and gradually climbs Golden Ridge to intersect Route 2 at a Y-shaped intersection where you had better pay serious attention to the yield sign.

Routes 2 and 158 and the Golden Ridge Road are the primary local roads in Sherman (I-95 punched through the adjacent woods in the 1960s). Rugged Mount Katahdin (5,269-foot elevation) rises to the west; the views improve dramatically the farther north a motorist goes on the Golden Ridge Road.

May Spooner and Levi Caldwell, another Sherman resident, developed the “Historical Address” that she presented to a June 17, 1886 reunion of Co. B, 8th Maine Infantry Regiment veterans (31 men from Sherman had joined that company). The reunion took place in Sherman Mills.

According to Spooner, Albert Osgood was the first Sherman resident to join the Army. Before the shooting ended, another 112 men from Sherman went off to war; 102 men enlisted, and the draft took 11 men. This meant that 87 percent of equivalent Sherman voters donned a Union uniform, based on Spooner’s figures.

But not that long ago Lincoln native John Forbey discovered a 114th Sherman soldier. Forbey is the great-great-grandson of James Madison Emery, whose name appears on the Sherman Roll of Honor along with three other Emerys. However, James’s brother, Benjamin F. Emery, is not listed on the roll (printed in the Historical Address that Spooner and co-author Levi Caldwell distributed at the Co. B reunion).

In her 1886 address, Spooner described Benjamin Emery as “the youngest [recruit from Sherman], being fifteen years old at [his] enlistment.” He joined Co. B, 8th Maine Infantry, and why his name was left off the Roll of Honor is not known.

With Emery’s inclusion Sherman sent 114 men (87.7 percent of its equivalent registered voters) to help save the Union. That’s why Sherman became the “Banner Town in the United States.”

This new book chronicles the swift transition of Joshua L. Chamberlain from college professor and family man to regimental and brigade commander.