Left widowed with two children (the youngest only a year old) days prior to Gettysburg, Caroline Ann Holmes did what many similar widows did in Maine during the Civil War; she turned to her family for help. The fact that certain brothers would exert political, economic, and military influence across New England and the Midwest in the mid- to late 19th century likely never crossed her mind in those dark days of summer ’63. 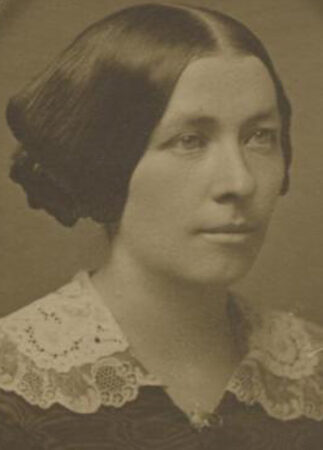 Born to Israel and Martha Benjamin Washburn in Livermore on January 30, 1833, Caroline was the youngest of 11 children born into an astounding family the likes of which Maine has seldom replicated. The eldest, lawyer Israel Washburn Jr., became Maine’s first war-time governor. The second child, Algernon, became a successful banker in Hallowell, and the third child, lawyer Elihu, moved to Illinois, added an “e” to his surname, ventured into politics, and befriended an upcoming attorney and politician named Abraham Lincoln.

The fourth brother, Cadwallader, became a Wisconsin attorney and congressman and took the 2nd Wisconsin Cavalry to war as its colonel; he would also help launch the company that became General Mills. Fifth child (and first daughter), Mary, married Frederick Stephenson and moved to Minnesota. After the eighth child (and seventh son), William died in infancy in 1828, his parents gave their ninth child (and eighth son) the same first name.

He was a Foxcroft native, born there to Salmon and Abigail Holmes on September 8, 1827. Foxcroft bordered Dover, and both lay along the Piscataquis River in what became southern Piscataquis County. After graduating from Bowdoin College, Holmes had studied medicine in Washington, D.C. before returning to his hometown to practice medicine. He and Caroline married in Livermore on June 3, 1857.

“He was very highly-esteemed here in the practice of his profession, became a universal favorite, and seldom failed to secure the confidence of all who employed him,” commented George Valentine Edes, a Dover native who published the Piscataquis Observer.

Edes considered Holmes “one of the best educated Physicians in the State.” He “was not one of those who made friends by flattery and fawning, but ever sought truth and right as his guide in all his transactions in life.”

The Holmes had a daughter, Fannie (also spelled “Fanny”), born in 1859, and Caroline was pregnant with a son, Frank, when Freeland Holmes mustered into the 6th Maine Infantry Regiment as its surgeon on March 13, 1862, He was commissioned 12 days later — and Frank was born on June 8.

On July 25, Freeland wrote Caroline that he was sending $195 home with Sgt. Benjamin F. Robinson Jr., a Sebec blacksmith who had mustered into Co. G, 6th Maine Infantry, in mid-July 1861. Robinson was “just discharged for disability from the service,” indicated Freeland, who had “no time to write.

“Am going to the steamboat with him and others,” he said. “Am well as usual, hearty.” He asked Caroline to “pay this money … to Father” and to send him “a ½ gros[s] of matches (Orono’s) if there is any chance.

“It has been five days since I heard from you,” Freeland wrote.

The doctor’s “departure for the army was a cause of very general regret,” Edes said. Patients looked with “high expectations to the time when he should return to us improved and matured by the practice of a profession he loved.” People hoped Holmes “might again apply his skillful healing to their various ailments. 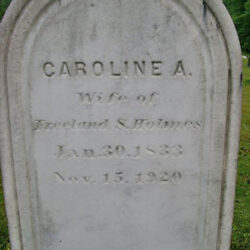 Caroline Ann Washburn Holmes never remarried after her husband, Army surgeon Freeland S. Holmes, died of disease in Virginia in June 1863. She lies beside him in a Dover-Foxcroft cemetery. (Courtesy Find-A-Grave)

“But it was not meant to be,” Edes admitted. While caring for his military patients, Holmes “died of disease” at Germantown, Virginia on June 23, 1863. The shocked and grieving Caroline received his embalmed body in its lead-lined casket, and the funeral service took place at the “Congregational Meeting House in Foxcroft” at 2 p.m., Thursday July 2.

Some 600-plus miles to the southwest, Confederate Gen. James Longstreet was maneuvering his troops to strike the Army of the Potomac’s left flank at Gettysburg.

Those of her family who could travel to Foxcroft attended the funeral. Although one online source claims that Caroline returned to Livermore to live with her father (her mother had died in 1861), the 1870 U.S. Census found her still living in Foxcroft with Fannie and Frank.

She died in Minneapolis at age 87 on November 15, 1920 and was buried in Foxcroft. Caroline and Freeland lie side by side in Rural Grove Cemetery, located just down the road from Dunkin Donuts and McDonald’s on West Main Street in Dover-Foxcroft, the town created by a March 1922 political merger.