Carrying a full pack, one Maine-based Civil War re-enactor participating in this year’s Remembrance Day parade at Gettysburg ventured forth on “my new knees” replaced last year. Not knowing how well they would handle the long march to the Gettysburg National Cemetery, he went forth proudly representing Maine heroes who had fought at Gettysburg 159 years ago.

Retired commercial mariner David (Dave) Sulin lives in West Rockport, “not to be confused with greater downtown Rockport,” he said, a smile in his voice during a phone interview on Monday, November 21, 2022. Coming to Remembrance Day “is one of my favorite things to do. It’s just fun.”

Sulin used to drive to Gettysburg in one day. “I am now admitting that I am over 25,” he said. “I leave home in Rockport on Wednesday afternoon. Milford, Connecticut is about my halfway point. I stop there for the night.”

Dave Sulin of West Rockport wears Union sharpshooter green while attending the 2018 Drums on the Penobscot in Bangor. He wore this same uniform while marching in the Remembrance Day parade at Gettysburg in 2022. (Brian F. Swartz Photo)

He reached Gettysburg on Thursday, November 17. A bit quiet then, the town started pulsating with life Friday as, amidst lectures and seminars held in different places, “re-enactors started pouring in,” Sulin said.

“The Maryland, south Jersey, northern Virginia re-enactors, their vehicles are packed, and they head up” on Friday, said Sulin. He donned a Confederate uniform and ventured forth Friday evening.

“I wander the streets and say ‘hello’ to everybody,” he said. Re-enactors flood the sidewalks and businesses, particularly around Lincoln Square and south along Baltimore Street and southwest along Steinwehr Avenue. Sulin watched people coming and going; “the visual presentation down here with all the re-enactors from all over the country coming in” with their wives and families was incredible, he said, particularly mentioning the women wearing mid-19th century outfits and re-enactors dining in the local restaurants.

Standing back from busy Steinwehr Avenue is the gray-stone Dobbin House Tavern, a 1776 inn where re-enactor bands “set up around the central part, facing each other” and held “an impromptu battle of the bands” Friday evening, Sulin said. “Conservatively there were 30 guys there playing drums of various sizes. It was absolutely terrific.”

Repeating a trip he made in early summer, Sulin visited the Maine monuments to place small national and state flags. He also met “with some Friends of Gettysburg at their little desk in the [national park’s] visitors’ center” and got an update on the Little Round Top renovations.

A low stone marker has long identified where Co. B, 20th Maine Infantry Regiment fought at LRT on July 2, 1863. “There was no direct path to it,” Sulin said. “You had to climb over mud and rocks and stuff to see it.”

Once LRT renovations are completed, the Co. B marker “will be a readily accessible part of the maps and tours there, which is it has never been,” he said. The FofG folks assured him that the renovations will provide “a good feel of what the Union left looked like” during the battle.

“It’s hard to estimate the numbers” of parade participants, Sulin commented. “I would say on the order of 5,000. There were more this year than there were last year. Friday afternoon it didn’t look like it, but the numbers swelled by Saturday.”

He marched wearing a sharpshooter’s forest green. “I did it in honor of those guys in Co. D, 2nd United States Sharpshooters,” a Maine-recruited company bloodied at Gettysburg July 2-3, 1863. “Many were from Rockland, my hometown,” Sulin pointed out.

Of the 15 sharpshooters who marched, he was the only one “with brand new artificial knees” and “the only one carrying that full 40-pound backpack.” But “I’m from Maine. I’m tougher than boiled owl,” Sulin chuckled. “It took that determination to do it. I felt it in my hips a lot; I was fatigued,” but his knees did not hurt afterwards.

Union re-enactors marched at the front, the Confederate re-enactors (“turned out in good numbers this year”) behind them. “The visual spectacle from being in the parade, of the parade itself, is fantastic; it’s like waves of blue ahead of you, rising and falling ahead of you,” Sulin said.

Many civilian re-enactors marched in the parade, and Sulin noticed “some of the beautiful capes that the ladies were wearing. It was just a lot of fun to see.” 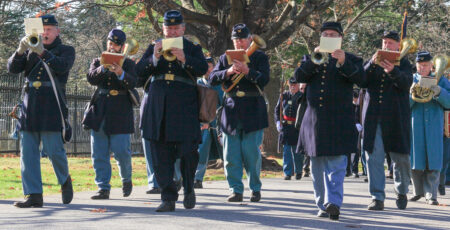 A Union band plays while matching into the Gettysburg National Cemetery during Remembrance Day on Saturday, November 19, 2022. (National Park Service)

There were two Civil War-themed balls in Gettysburg on Saturday night. “I often go down to where the balls are, and I stand to watch the ladies come in in these wonderful outfits,” he said. Older men wear “the pristine generals’ uniforms,” but Sulin wears one of his three re-enactors’ uniforms (the other is that of Co. B, 20th Maine Infantry, a modern re-enactment group), none of which could be described as “pristine.”

“I haven’t grown up yet,” Sulin chuckled. “There are a couple of holes in my uniforms.”

Some re-enactors portray specific generals. “The [Ambrose] Burnside guy, I spoke with him for a half hour before the parade Saturday. He’s got the look” down pat.

As for Confederate generals, Sulin thinks “there are too many Stuarts, Jacksons, and Longstreets. A couple of those guys are long-time acquaintances of mine. The give and take with old friends is a huge part of this” annual event.

Sulin reported he had three more stops to make at Maine monuments before going home. Then “I will take a general last swing through the battlefield, come out, fill the tank at a gas station,” and head northeast, “stopping tonight in Milford [Connecticut].”

First though, he would drive southwest on the Emmitsburg Road, pass the Peach Orchard, and turn left onto the lane leading to the Slyder Farm. Some 500 yards in from the road, near a curve, stands the simple white granite monument honoring Co. D, 2nd USS.

“I’ve saved one last Maine flag and one last American flag to replace what I put there” earlier in 2022, “and I will pay my respects to the guys of the 2nd United States Sharpshooters at their monument,” Sulin said.