Wise to the ways of the sea, Captain Joshua D. Warren kept the steam up aboard his warship when blockading the approaches to North Carolina’s Cape Fear River. That practice paid dividends one morning in late spring 1862.

The blockade runner Sumter (left) slips past Union warships and into the Mississippi River’s Pass a l’Outre on June 30, 1861. A naval officer from Maine dealt with a similar situation off North Carolina only 11 months later. (Library of Congress)

Born in Wiscasset on January 1, 1809, Warren went to sea and by 1850 was a “shipmaster” living with his wife, Hannah, in a strangely configured household in Pittston on the Kennebec River. Ten years later he still lived in Pittston, but alone, and he was a “master mariner” with real estate worth $4,000 and personal property worth $1,000.1

By any definition “Captain” Warren was an experienced sailor who could handle just about any ship and any crew in any weather.

After the Union imposed its Southern blockade in 1861, the expanding Navy created positions such as “acting mate” and “acting master” to attract qualified mariners into the service. Often just about as snotty nosed about serving with volunteers as were their West Point-educated Army counterparts, the professional Navy officers demanded a serious demarcation line between themselves and experienced civilian sailors; the available ranks were “acting master,” “acting lieutenant,” etc., with the emphasis on “acting.” 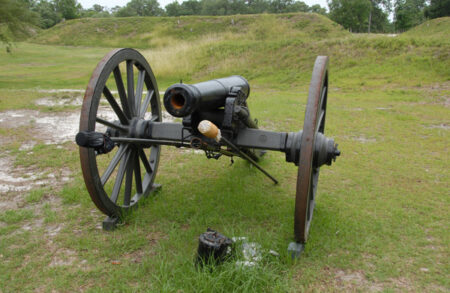 Sited on the west bank of the Cape Fear River, Fort Anderson was among the posts defending the water approaches to Wilmington, N.C. (Brian F. Swartz)

Literally an “old salt,” the 52-year-old Warren joined the Navy as an “acting commander” on June 2, 1861. He soon received command of USS Victoria, a 254-ton screw steamer built in a Kensington, Pennsylvania shipyard in 1855. The 113-foot Victoria had a 22-foot beam and mounted a 30-pounder Parrott rifle forward and two 8-inch smoothbore cannons.

The Navy Department bought the Victoria at New York City on December 26, 1861 and outfitted the steamer at the New York Navy Yard in Brooklyn. The Navy commissioned the ship on March 13, 1862, and Lt. Cmdr. George A. Stevens took the steamer to sea to join the North Atlantic Blockading Squadron.

Command passed quickly to Acting Master Warren, definitely commanding the Victoria when it “steamed up to the mouth of the Rappahannock River and anchored at 9 p.m.,” Tuesday, March 25. Boarding ship’s boats, crewmen probed Confederate positions upriver during the next few days, and on March 27 Warren shelled suspected enemy hiding places, such as “the woods and other places of concealment.”

On April 2 he started “towing the U.S. gunboat Chocura” to Baltimore, arriving there at 2:30 p.m., April 3 and quickly obtaining “a sufficient quantity of coal to fill my coal bunker.” Sailing the next day, Warren reached Hampton Roads on April 5.

The USS State of Georgia was one of two Navy gunboats that captured a blockade runner near Wilmington, N.C. in late May 1862. The other gunboat was the USS Victoria, commanded by a Mainer. (U.S. Navy)

In mid-April the Navy transferred Victoria to the squadron blockading Wilmington, North Carolina. Thick fog enveloped his ship “off Wilmington Bar” when Warren “weighed anchor” on Wednesday, May 28.

He intended “to stand off to sea,” but “the fog lifted … and we saw a steamer closer in under the land, steering directly for Port [Fort] Caswell, under a full head of steam.” Located on the tip of a peninsula jutting into the Cape Fear River’s western approaches, Fort Caswell guarded the river’s entrance.

“Not more than a mile off” when spotted, the steamer was a blockade runner seeking the Cape Fear River and the protection of Caswell’s guns. Warren “immediately started ahead for the purpose of cutting her off, holding her under my guns.”

The USS State of Georgia “saw her about the same time, and immediately fired at her,” but the blockade runner “took no notice,” Warren reported. While Victoria “still kept on at full speed,” he ordered his 30-pounder’s crew to open fire.

The “State of Georgia all this time was sending shot and shell thick around her,” Warren reported. “Our fourth shell struck the water and ricocheted over her decks. She immediately hauled down her flag and hove to.” 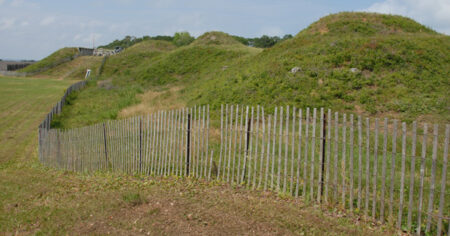 The massive bastions of Fort Fisher protected the seaward approaches to the Cape Fear River below Wilmington, N.C. (BFS)

Suddenly “I discovered a boat filled with men pulling from the steamer to the shore” and “gave orders to fire upon the boat,” Warren said. “Our first shell passed over and burst in the woods.”

Reaching the beach, the fleeing crewmen boiled from their boat, but Victoria’s next shell “struck the beach in their midst,” killing one man and wounding another. “The rest fled into the woods in every direction,” Warren observed.

His sailors boiled aboard the blockade runner, quickly identified as “the rebel steamer Gordon, alias Nassau,” bound from the Bahamas to Wilmington under “the famous Captain Walker.” The Gordon was “loaded with Enfield rifles, ammunition, clothing, medicines, etc., for the rebel army,” Warren reported.

His crewmen also captured 30 people, “including two women,” he said. Twelve sailors apiece from Victoria and State of Georgia formed the prize crew, “well armed” against any troublesome prisoners. Shifted “to a safe anchorage,” the Gordon loaded coal transferred from the State of Georgia, and the prize crew weighed anchor at 3:30 a.m., Thursday, and started for New York City. There a prize court would determine the blockade runner’s fate and value.

The Victoria, which drew 11 feet, had pursued the Gordon “into about 19 or 20 feet of water,”said Warren. “It was a lucky ‘grab’ when we took this Goliath of Rebeldom.”

Mentioning again his prisoners — and especially the women — Warren reported that “we sent [them] all North to spend the summer, that being our style of showing Naval courtesy.”2