Ellsworth rolled out the red carpet when the 6th Maine Infantry’s elderly survivors converged on the Hancock County shiretown 50 years after going forth to defend the Union.

When the 2nd Maine Infantry Regiment left Bangor for Washington, D.C. by train on May 14, 1861, five unattached companies remained at Camp Washburn. These companies were recruited in Brownville, Bucksport, Corinth, Ellsworth, and Old Town. 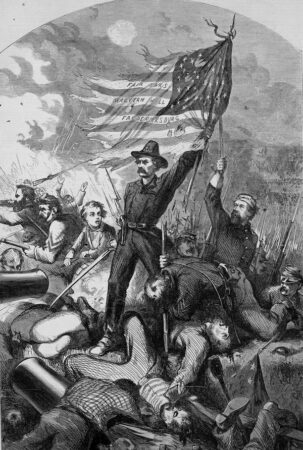 A Harper’s Weekly illustration depicts the 6th Maine Infantry’s survivors standing victoriously at Fredericksburg after charging the Sunken Road and Marye’s Heights on May 3, 1863. (Harper’s Weekly)

Receiving their first pay that day, too many 6th Maine lads drunkenly brawled through downtown Portland Tuesday night. The next day, officers ordered the soldiers (whether hung over or not) aboard a Boston & Maine train for Boston.1

Bloodied at Williamsburg, the 6th Maine fought in the Peninsula Campaign and at Fredericksburg, helped guard the Union’s far left flank at Gettysburg, took the cold steel to the Confederates defending the two redoubts at Rappahannock Station, and bled profusely in the Wilderness and at Spotsylvania Court House.2

Then, except for the men transferring to the 1st Maine Veteran Volunteers, the surviving three-year veterans came home. After the war they formed the 6th Maine Veteran Association.

“It was the survivors of this band of fighters, with their wives and children and grandchildren, who came to Ellsworth” on Friday, July 14, 1911 “to celebrate the fiftieth anniversary of their mustering in,” the Ellsworth American reported. “Of course Ellsworth was proud to have them meet here.” 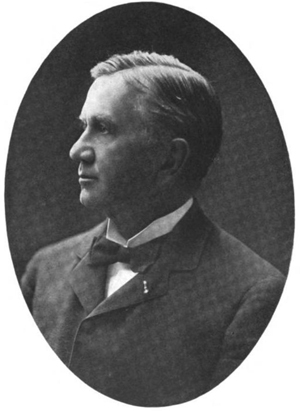 Charles Amory Clark was the president of the 6th Maine Veterans Association when the regiment’s survivors met 50 years after joining the army. (Wikipedia)

A hero called the association’s business meeting to order at 2:30 p.m. The EA’s reporter did not note if comrades cheered when Col. Charles Amory Clark, association president, stood to oversee the proceedings. He had traveled from Cedar Rapids in Iowa (where he would die 2½ years hence) to attend this reunion. When Confederates trapped VI Corps against the Rappahannock River during the Chancellorsville campaign, Clark had led the 6th Maine lads down a steep bank to safety after dark on May 4, 1863. For this he later received the Medal of Honor.

Under Clark’s guidance, association members approved reports from the secretary and treasurer (he reported $108.67 in the association’s till), elected new officers, and agreed to meet in Dover and Foxcroft on July 8-10, 1912.

Then the old heroes noted the passage of time. Of the 150 guests, only 36 were actual veterans; the rest were women (including some widows) and other relatives. Eleven identified comrades had died since the 1910 reunion; odds were great that death would thin the ranks during the next 12 months.

Concluding the business meeting, the guests ate supper and then settled down at 8 p.m. for the traditional “campfire,” a time to share and to remember. Amidst a prayer and the music, the featured speaker was Col. Charles A. Hamlin (oldest surviving son of Hannibal Hamlin).

Charles Clark was up next. Talking “for nearly an hour,” he recalled the 6th Maine’s history and “its deeds of valor on the field,” of which he offered “many striking instances of collective and individual heroism, hardship and success.” Clark threw in a lot of humor, too.

Women then dominated the program, with one wife singing “a soprano solo” and “Miss Julia” (daughter of veteran S. Scott Estey) reciting “a patriotic poem … in [a] clear, strong voice.”

Accompanied by her sister Christina (likely playing the piano), “Little Miss Elleneen Doyle, a granddaughter of the late Stephen Monahgan,” sang “a patriotic song,” and “her singing and graceful stage manners captivated the audience.”

Speakers and singers followed Elleneen. Experiencing the heart-felt camaraderie, the old veterans and their relatives “remained to the close, realizing, apparently, that an occasion of this sort was an event of a lifetime …”

A quartet sang “John Brown’s Body,” and Clark concluded the campfire at 11:30 p.m. He probably did not know that this “very day of the reunion here,” the Iowa Department, GAR, had elected him its commander.3