Portland raised a ruckus for one battered Maine infantry regiment in October ’62.

With disease, the Peninsula Campaign, and their heroic and shot-to-pieces Antietam charge behind them, the 7th Maine’s survivors numbered around 350 men, with perhaps 150 fit for service by early October. Bestowing a rare wartime honor, Maj. Gen. George B. McClellan ordered the regiment home.

“In view of the reduced and shattered condition of the Seventh Regiment of Maine Volunteers,” McClellan on October 2 applied to the War Department to let the regiment to report in Maine to Governor Israel Washburn Jr. McClellan wanted the regiment “recruited and reorganized under your personal supervision.”

“In returning this gallant remnant of a noble body of men” to Maine, McClellan asked Washburn to use his “best endeavors to fill at once their diminished ranks, that I may again see their standard in the Army of the Potomac.”

Boarding a train at Hagerstown, Maryland, the 7th Mainers traveled home via New York City and Boston. The young Maj. Thomas W. Hyde, who had led that bloody Antietam charge, remembered “our march, the whole length of Broadway [in NYC] through cheering crowds and the booming of saluting cannon.” He also recalled “the hearty entertainment given us by the city of Boston.”

The Beantown stop behind them, the 7th Maine lads left North Station by train at 8 a.m., Monday, October 13. Clattering north through New Hampshire and southern Maine, the train pulled into the Portland depot at 1:10 p.m.

“An immense crowd, comprising both sexes, had assembled … to greet the soldiers,” reported the Portland Daily Press. Women walking along the depot’s platform passed “beautiful bouquets” to soldiers through open windows.

Representing the city, “the committee of arrangements” met the train. As the soldiers passed through the depot and “emerged from the building[,] shouts of welcome rent the air,” the PDP observed. Loud cheering rent the air, “the ladies waved their handkerchiefs,” and “salutes were fired from field pieces near the depot.”

People realized these were battle-hardened veterans. “The officers and men were worn out with the hardships they had endured,” the PDP observed. The regimental flags were “rent with bullets and stained with blood,” and only 146 men had arrived in Portland. While most soldiers marched, “the sick and wounded, about a dozen, were placed in carriages.”

Escorted by Poppenburg’s Band and two companies from the 17th (U.S.) Infantry Regiment (which garrisoned the Portland Harbor forts), the 7th Mainers marched from the depot to State Street. Hyde recalled being escorted also by companies from the 23rd, 25th, and 27th Maine infantry regiments, all nine-month regiments slated for active duty. Each regiment provided a battalion (two to four companies), and Brig. Gen. Francis Fessenden commanded the troops. 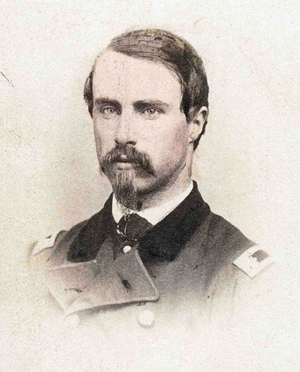 Thomas W. Hyde of Bath was a 7th Maine Infantry captain when photographed early in the war. By Antietam he was a major temporarily commanding the regiment. (Maine State Archives)

A large official procession then escorted the 7th Mainers to Portland City Hall. Reflecting a 21st-century trend at Memorial Day and Fourth of July parades in Maine, multiple firefighters and fire engines lined up behind the veterans. The Portland Commandery Knights Templar (“grand and imposing”) came behind high school cadets making “a very handsome appearance in their uniforms.”

As they marched toward city hall, the 7th Maine lads were “vehemently cheered by the crowds gathered in the streets, and by ladies in the doors and windows and on the roofs of dwellings who waved their handkerchiefs,” according to the PDP. Flags festooned many houses along State Street, and at least one banner apiece was strung above State Street and Congress Street.

The parade stopped at city hall, and the 7th Maine “entered their quarters” nearby. The nine-month battalions “marched to the Kennebec & Portland [Railroad] depot” and met the train carrying Governor Washburn and other politicians. Escorted to city hall, the delegation entered to “great applause” and “Poppenburg’s Band playing a National air.”

Then “the remnant of the gallant 7th entered” the building, “and it seemed as if the roof would come off, so rending was the cheers given them,” according to the PDP. Men and women alike voiced their admiration for the Antietam heroes; “it was the most cheering and lively scene that Portland has ever witnessed,” the paper opined.

Then in marched Col. Edwin Mason, Lt. Col. Selden Connor, and Maj. Hyde “with the staff of the 7th Maine.” Cheers resounded as the soldiers “took their places on the platform.

A prayer opened the ceremony, which featured music and speeches. Stepping forward, Washburn generated loud cheers as he addressed the 7th Mainers, “In the name of your friends, and they are all the loyal people of Maine, I salute you!”

Hyde recalled the governor saying, “It was in a struggle for human rights on that dreadful day at Antietam that your little but devoted band, by its gallantry, courage, and consecration, made for itself a name that shall live so long as the memory of this war remains.”

Speaking for a little while, Washburn concluded, “May God bless the 7th Regiment, and all the Regiments of Maine volunteers, for they are one in valor and devotion, and prosper the cause of our country.”

Speaking so quietly that many people struggled to hear him, Mason talked about the regiment’s experiences. He sat down to three cheers apiece for himself, Connor, Hyde, and the 7th Maine, and afterwards its members marched to Mechanics’ Hall for a sumptuous dinner.

Hyde and the others spent “that happy winter” resting and recruiting, and the War Department recalled the 7th Maine in time to participate in the Chancellorsville Campaign. “We really wanted to go back,” Hyde said, “and why men should want to seek out hardship and danger, I cannot explain, but it must have been because we had not yet had enough of it.”