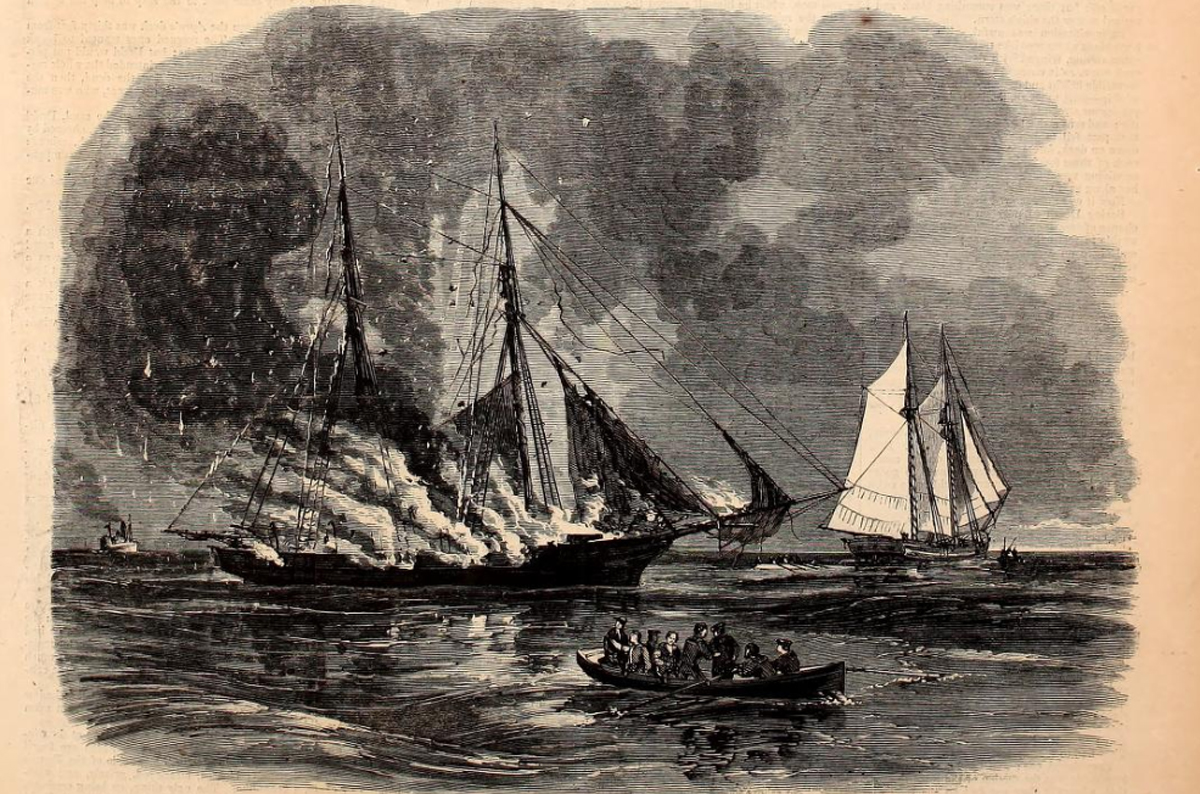 Confederate sailors row away from the burning Revenue Service cutter Caleb Cushing on June 27, 1863. The Southerners had spirited the captured cutter out of Portland harbor in the early darkness, but could not get up steam to escape two pursuing steamers. The attack resulted in Maine Governor Abner Coburn seeking help from Edwin Stanton and Gideon Welles. (Harper’s Weekly)

Confederate sailors under Lt. Charles W. Read, CSN, had captured the Revenue Service cutter Caleb Cushing in Portland harbor early on June 27, 1863 and had almost gotten away. Unable to fire up the cutter’s steam engine and hampered by a fickle, apparently pro-Union breeze, Read and his crew were overtaken by two pursuing steamers packed with angry Mainers.

Setting fire to the Caleb Cushing, the Confederates (deemed “pirates” in New England newspapers) abandoned ship and rowed into captivity. The cutter spectacularly blew up and sank; the explosion was “distinctly heard” by workmen repairing the forts protecting the Portsmouth Navy Yard in Kittery.

Read’s daring raid thoroughly frightened Maine politicians and spurred numerous calls for help from Washington, D.C. Governor Abner Coburn quickly telegraphed Brig. Gen. James W. Ripley, the War Department’s chief of ordnance, and asked him to let the major commanding the Kennebec Arsenal at Augusta issue upon Coburn’s request “such arms and ammunition as might be deemed necessary to put into the hands of the State militia, for the safety of the community.”

Conferring with Secretary of War Edwin Stanton, Ripley mailed a two-paragraph reply to Coburn on June 30. He received the envelope on July 3.

Stanton had decided that “for want of authority to issue United States arms and ammunition to troops not in the service of the United States,” Coburn could forget about arming Maine’s militia at federal expense, according to Ripley. However, if the Guv wanted to enlist the militia “into the United States service,” then the “requisitions for arms, equipment, ammunition, and other ordnance stores … will be promptly attended to, and properly executed.”

Coburn already knew about the political machinations that Pennsylvania Governor Andrew Curtain had just undertaken to arm his volunteer militia enlisted during the Gettysburg Campaign. There was no way that Maine could afford to buy the firearms, uniforms, and other equipment its militia — and there was no way that Coburn would let Stanton absorb Maine militiamen into the Union army in 1863.

On June 30 Coburn telegraphed Navy Secretary Gideon Welles. “The shipping on this entire coast, and the various ship-building cities and towns are exposed to the depredations of rebel cruisers,” Coburn said. “The various steamers, coasting and fishing vessels, are without the slightest protection from rebel pirates who are upon our coast, and who may swarm here with impunity.

“They may also enter our rivers and numerous ports and destroy our shipping and ship-building towns,” Coburn informed Welles.

The fear in Maine was palpable in the press and in personal and official correspondence. To protect the important coastal towns, Coburn had “organized ‘State Guards’ at points particularly exposed, and portions of the coast and large towns are defended by the coast defences.

“Still our entire commerce on this coast is without protection against rebel armed raiders,” he wrote. The state had just hired “a small steamer to guard the approaches” to Bath (and thus upriver Augusta, Gardiner, and Hallowell).

“The necessity of the case, I respectfully submit, demands the employment of an armed steamer to cruise on this coast for the protection of these interests,” Coburn informed Welles. “I earnestly invite an early consideration of the subject.”

The Navy would send a ship to “cruise on this coast.” The Army, apparently, would have let Southern infantry land anywhere in Maine and run amuck without dispersing to the state’s militia the ordnance and munitions stored in the Kennebec Arsenal.