He’d been shot and briefly captured at Gettysburg, had led his men into the maelstroms at First and Second Manassas, and had scurried as dawn approached on December 16, 1862 to find and save missing pickets at Fredericksburg.

Now Elijah Walker was home, but bureaucracy followed him even there. 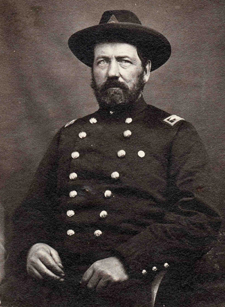 Elijah Walker, colonel of the 4th Maine Infantry, discovered that the bureaucracy followed him home after the regiment mustered out of federal service. (Maine State Archives)

With the Army of the Potomac visibly and busily preparing for a spring ’64 offensive, Col. Elijah Walker had to take precious time on April 15 at “Hd.[Qua]trs. 4th Me. Vols.,” and acknowledge receiving the April 9 “communication” from Maine Adjutant Gen. John L. Hodsdon “in regard to photographs.”

Since 1863 Maine had required its officers to send their photographs to Hodsdon, who preserved them. Today some 2,500 such photos comprise the Civil War Era Soldiers’ Portraits available online through the Maine State Archives at https://digitalmaine.com/arc_civilwarportraits/

What Walker thought about Hodsdon’s distracting request for photographs is not known. Through the war Walker had occasionally spouted off about generals he thought incompetent, and he had made enough noise that even a brevet brigadier’s promotion would be denied him post-war.

Technically Governor Samuel Cony was Maine’s commander in chief pertaining to the state’s artillery batteries and regiments, but the paperwork flowed through the adjutant general’s office. Walker knew better than to spout off to Hodsdon.

Noting that Hodsdon’s “communication … is at hand,” Walker wrote, “I will do what I can to assist in the well designed object. Enclosed I forward one such [photograph] as I have at hand. Also one of our sutler, which we desire should have a place on the album. 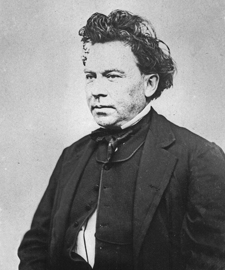 “The officers present [that April] are makeing [sic] preperations [sic] to comply with your request,” Walker wrote. As for those 4th Maine officers serving when Col. Hiram Berry “was promoted” to brigadier general in 1862, Berry’s widow “has photographs” of them, Walker noted.1

The 4th Maine marched forth to guard wagon trains and fight as the AoP maneuvered through the Wilderness, past Spotsylvania Court House, and to the North Anna River. There the regiment formed with its brigade along a treeline near sunset, as rain fell on Monday, May 23.

Ahead in the fading light stood a South Carolinian-defended redoubt, guarding the approaches to the Chesterfield Bridge spanning the North Anna. Two Union brigades would charge and capture the fort. Walker and his men lay within the woods, waiting to launch what the Maine colonel called “a ‘forlorn hope.’

“The division general had disappeared, taking his pet colonel, so our brigade had no commander,” the irascible Walker commented about another yet incompetent general. “Regimental commanders desired me to take command. I walked the entire length of the brigade line, trying to encourage the men and advising the advance be made upon the run, without firing a shot until we met the enemy face to face.”

Walker took out the brigade, a supporting brigade charged, too, and the Yankees succeeded “handsomely, some of the enemy being captured, and the rest driven over the bridge, followed closely by our men … in the rush a number were crowded off the bridge and drowned.” reported Lt. Col. Horace Porter, an aide to Ulysses S. Grant. 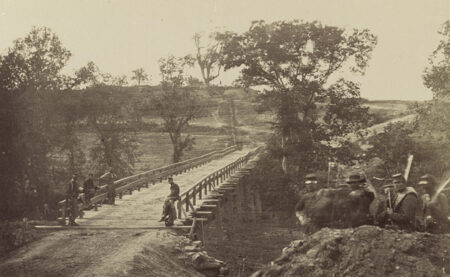 Union soldiers (right) cluster near the Chesterfield Bridge spanning the North Anna River in late May 1864. The caption indicates that beyond the bridge rises a redoubt that Confederates held until driven out by attacking Yankees near sunset on May 23. )Timothy O’Sullivan, Library of Congress)

The 4th Maine Infantry lost five men killed and 18 wounded (including Walker’s “slight” wound) at the battle of Chesterfield Bridge.1

Walker and the 4th Maine reached Petersburg. On June 15 the War Department ordered the regiment mustered out, and 147 men who had mustered three years soon headed north, arriving in Rockland to a rousing and warm welcome on June 25.

Bureaucracy followed Walker home to Rockland, where he had established the “Hd.[Qua]trs. 4th Me. Vols.” according to the letter he wrote Hodsdon on Saturday, July 2.

Acknowledging that he had received Hodsdon’s June 30th letter pertaining to the 4th Maine’s flags and regimental books,” Walker responded that “all officers who have not sent theirs [company books] will send them [at] the first opportunity.

“The most of our regimental books and papers (except Co.[mpany]) descriptions and clothing were sent from Brandy Station for storage at Alexandria [Virginia], and we were unable to find them when we wer[sic] on our way home,” Walker pointed out. “If we are fortunate enough to get them and I think we shall, I shall be pleased to have an opportunity to leave them with you for safe keeping.”

As for the flags, “we have one regimental color with arms of the State [the Maine state seal], and two national colors, Stars and Stripes,” Walker indicated. “I intend to send them to you as soon as the Regiment is mustered out.”2

High summer brought a major change in Walker’s status. On August 16, Walker wrote Hodsdon, “I have the honor to acknowledge your receipt for 2 guidons and one regimental & one National color or flag.” Issued by the government (he did specify whose) “about the first of April 1864, I thought as they were not much worn we might have to turn them in to some depot … but [I] concluded to send them with the others to you.”

One can almost hear Walker muttering, “I am now a civilian. Leave me alone!”